She beat defending champion Sun Yu of China 18-21, 21-11, 21-14 at the Singapore Indoor Stadium to become the first women's singles player to win three Superseries title in as many weeks. Ratchanok also won the India and Malaysia titles on her way to Singapore.

With the win, the 2013 world champion will also displace Spain's Carolina Marin as the new world No. 1 shuttler when the new weekly world rankings are updated on Thursday. 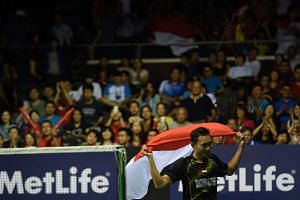 She said after her victory: "Today I just try to relax. My target (was) to be world No. 1. I'm looking forward to the Olympics. I want to win gold for Thailand.

"Today I made many mistakes, my opponent too, but I managed to get back into the game earlier than her."

In defeat, China's Sun remained optimistic of a week's performance that led her to a first Superseries final since her win here last year.

The world No. 14 was issued a yellow card by the umpire for misconduct in the second came, after wiping herself down with a towel despite having her request rejected.

She said: "I was a bit affected, because I wasn't trying to waste time and the decision against me did affect me a little.

"But I think I still did quite well to make the final."