The 31-year-old had come through the tournament as a qualifier, beating China's Lin Dan in the semi-finals en route to the final.

This is his first Superseries title win in six years. He last tasted success at this level on the same stage at the 2010 Singapore Open. 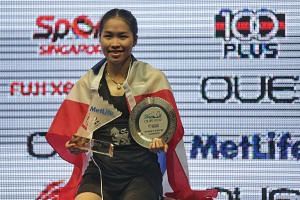 Said the 2004 Olympic bronze medallist, who has struggled with injury over the years: "It's really been a while since I've won a Superseries title. It's such a big achievement to be able to pass through the qualifiers and win this. It's really unexpected, it's a long journey but it's such a meaningful journey."

With several Indonesians ranked above him, however, Sony is still likely to miss August's Olympics in Rio de Janeiro. He had also missed the London Games in 2012 after injury set him back in the qualification process.

South Korean Son was playing in his first final since winning the Hong Kong Superseries in 2014.

He said: "I had a slow start, and that was my problem. Made too many mistakes. Sony is a very experienced player and knows how to deal with hard situations."