SINGAPORE - Badminton's world No. 1 Lee Chong Wei became the oldest man to win the All England Championship on Sunday.

More significantly, Lee indicated that he would defend his title next year, dispelling speculation that he was due to retire imminently.

Here's a look at his career over the years:

Lee clinched his fourth All England badminton title on Sunday - bringing his tally of BWF World Superseries Premier titles to 12.

He has a total of 28 BWF World Superseries titles, twice as many as his arch-rival, Lin Dan of China.

Malaysia's most successful Olympian has won three Olympic silver medals but never stood on the top step of the podium.

Last year, he fell to another Chinese, Chen Long , in Rio. Then 33, the loss meant that Lee will end his career without Olympic gold. 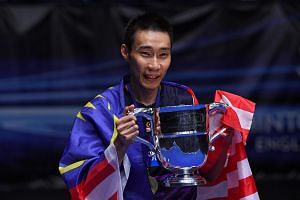 The other major title to elude him is the World Championship. His collection includes three runner-up finishes and a third placing.

On April 27, 2015, it was announced that Lee had been handed a backdated eight-month ban for violating anti-doping rules.

He had tested positive for dexamethasone after urine samples were taken during the World Championships in 2014.

He was consequently stripped of his silver medal from that tournament.

Following last year's defeat in the Olympic final, he failed to win any tournament he participated in from September. He was defeated in the third round of the Denmark Open, pulled out from the French Open due to a hamstring injury, and ended the year with a group-stage exit in the Super Series Finals.

Other multiple winners of the All England Open in recent years: