CAPE TOWN (REUTERS) - Olympic 800m champion Caster Semenya on Wednesday (May 1) lost her appeal against rules that mean middle distance female athletes with a high natural level of testosterone must take medication to reduce it.

The Court of Arbitration for Sport (CAS) ruled the regulations were necessary for athletes with differences in sexual development (DSDs) to ensure fair competition.

The case is likely to have far-reaching consequences for women's sport, and has split opinion around the globe.

But the court also voiced concern about how the new rules, which cover events ranging from 400m to a mile, would be implemented by the International Association of Athletics Federations (IAAF), the sport's governing body.

Testosterone increases muscle mass, strength and haemoglobin, which affects endurance. Some competitors have said women with higher levels of the hormone have an unfair advantage.

Semenya has said she does not wish to take medication to change who she is and how she was born, and wants to compete naturally.

"I know that the IAAF's regulations have always targeted me specifically," Semenya, 28, from South Africa, said in a statement released via her lawyers.

"For a decade the IAAF has tried to slow me down, but this has actually made me stronger. The decision of the CAS will not hold me back. I will once again rise above and continue to inspire young women and athletes in South Africa and around the world."

The ruling means Semenya and other athletes with DSD hoping to compete at the World Championships in Doha in September would have to start taking medication to lower their testosterone levels within one week.

Semenya and her lawyers are considering appealing the ruling.

Professor Steve Cornelius, an adviser to the Athletics South Africa legal team, told television news channel eNCA the case could be elevated to the European Court of Justice.

The IAAF welcomed the verdict, saying it was "pleased that the regulations were found to be a necessary, reasonable and proportionate means of achieving the IAAF's legitimate aim of preserving the integrity of female athletics in the restricted events. 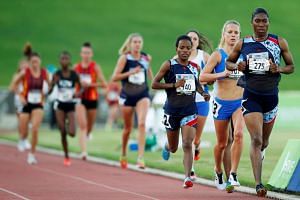 However, in the 165-page ruling, the CAS Panel expressed concerns as to the future application of the regulations.

"The Panel found that the DSD regulations are discriminatory, but the majority of the Panel found that, on the basis of the evidence submitted by the parties, such discrimination is a necessary, reasonable and proportionate means of achieving the IAAF's aim of preserving the integrity of female athletics in the restricted events," the statement said.

Under the rules, female athletes who have high natural levels of testosterone will have to reduce their levels through medication to under 5 nmol/L, which is double the normal female range of below 2 nmol/L.

The court suggested the regulations be limited to events between 400m and 800m due to a lack of evidence that testosterone has a significant effect beyond these distances.

This has been rejected by the IAAF for now, which says it could expand or reduce events under the regulations in the future if there is a compelling scientific case.

South Africa's Sports Minister Tokozile Xasa said: "Naturally we are disappointed with the judgement. We will study the judgement‚ consider it and determine a way forward. As the South African government we have always maintained that these regulations trample on the human rights and dignity of Caster Semenya and other women athletes."

The IAAF has received support from some current and former athletes.

British former long distance runner Paula Radcliffe said: "I understand how hard a decision this was for CAS and respect them for ruling that women's sport needs rules to protect it."

But the governing body has also come in for criticism from human rights organisations. The United Nations Human Rights Council adopted a resolution in support of Semenya in March.

The reaction in South Africa has been particularly stinging.

Letlhogonolo Mokgoroane from Sonke Gender Justice, a non-governmental organisation, said: "Essentially, it's reverse doping and it's disgusting. The decision will have far-reaching implications, not just on Caster Semenya, but it will also apply to transgender and intersex people."

Following the CAS case, other sporting bodies may now choose to set their own parameters for participation by DSD and transgender athletes in their individual codes.

Semenya took potential steps to reinvent her career in the past days when she won the 5,000m at the South African Athletics Championships in a modest time of 16:05.97, an event that would allow her to compete outside of the IAAF regulations.