SINGAPORE - The fallout from national marathoner Soh Rui Yong’s dispute with former teammate Ashley Liew continues, with the former’s lawyer sending a letter of demand to One Management and its co-founder Jed Senthil K Jivaraju on Tuesday (Oct 15) accusing the parties of defamation.

One Management, which is co-founded by Jed and former marathon champion Mok Ying Ren, is the parent company of RunOne and ONEathlete, which manages Liew.

In October last year, Soh had in a Facebook post disputed Liew's account of a contested act of sportsmanship that occurred during the 2015 SEA Games marathon final. Liew said he had slowed down to allow his rivals to catch up after they missed a U-turn and took the wrong path during the race. For his actions, Liew was nominated for and won the Pierre de Coubertin World Fair Play Trophy and a sportsmanship award from the Singapore National Olympic Council.

Following Soh's comments, RunOne published a statement last October to respond to his claims, stating that it stood by Liew and the decision by the Singapore National Olympic Council and International Committee for Fair Play to "nominate and confer" the award to Liew.

On April 2 and 9, RunOne published two more statements on its website to respond to media queries on the matter. Its April 2 statement claimed that Soh's allegations had "unfairly cast doubt over ONEathlete, Ashley Liew's repute as an individual, working professional and national athlete".

The second media response published a week later provided a summary of events and refuted Soh's claims regarding the alleged act of sportsmanship and subsequent developments. It also said that Liew's lawyer from That.Legal LLC had sent a "cease and desist" letter to Soh requesting that the latter retract his statements and make a public apology.

In his letter of demand on Tuesday, Soh, who is represented by Foxwood LLC's Clarence Lun, said that the three statements "are defamatory" and that the former has been "put to significant loss, inconvenience and distress" as a result.

Soh is demanding for total compensation of $1 million from One Management and Jed - to the tune of $500,000 each - for the injury to his "professional standing and reputation". He has also demanded for a public apology be published in selected media and for both parties to provide an undertaking not to publish or cause to be published any further statements that "may be defamatory" to Soh.

The Straits Times has reached out to RunOne and Jed for comment. 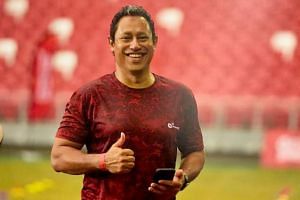 In April, Liew sent a letter via his lawyer accusing Soh of hurting his professional image as a chiropractor and his reputation as a competitive marathon runner with his statements. A month later, Liew's lawyer sent a second note demanding that Soh pay $120,000 in monetary damages to his client for defamation, remove all "false" public statements and issue a public apology.

Last week, Soh filed his defence and counterclaim against Liew, alleging defamation from the April 2 and 9 statements published on RunOne's website and seeking $250,000 in "losses and damages".

Last month, Soh also sued the sport's local governing body SA for libel, as he had taken issue with its statement on his non-selection for the Nov 30-Dec 11 SEA Games in the Philippines. In August, Soh's lawyers from Foxwood filed a defamation writ in the High Court against Malik for alleged defamatory comments made in a Facebook post and remarks on the same post's thread.

An indicative value of $500,000 each has been provided for the lawsuits involving SA and Malik, with damages for libel, including aggravated damages, left to the court to assess.