The 20-year-old cleared the bar at the second attempt with room to spare and was only three centimetres short of the world record he set indoors in Glasgow in February.

Despite that, he decided not to go for a higher mark at the huge Stadio Olimpico, where there were no spectators due to Covid-19 restrictions.

Sergey Bubka's 6.14 metres mark in 1994 was the previous highest outdoor clearance, but World Athletics has not distinguished between indoor and outdoor records in pole vault since 2000.

"There's a lot of confusion because the pole vault is the only event which has one world record for both indoors and outdoors," said Duplantis.

"I wanted the outdoor world best at 6.15 so there would no longer be any confusion. I now have the best jumps indoors & outdoors."

Duplantis, a world silver medallist in Doha last year, set a world record by clearing 6.17m in Torun, Poland, in February and then bettered that by one centimetre in Glasgow the same month. He has won all 15 meetings he has competed in this season.

The son of an American pole vaulter who grew up with a pole vault pit in his garden at home in Louisiana, he was vaulting higher than a London double decker bus as a teenager and at 17 he had already cleared 5.90m.

There were also impressive performances on the track with two world lead times. 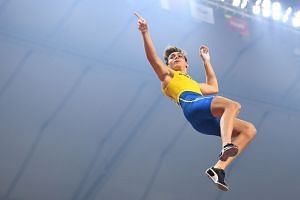 Elaine Thompson-Herah ran the fastest time this year as the Jamaican demolished the field to win the women's 100 metres in 10.85 seconds. American Aleia Hobbs was a distant second and Ivorian Marie-Jose Ta Lou third.

Jacob Kiplimo also produced a world lead time to win men's 3,000 metres ahead of Jakub Ingebrigtsen in seven minutes 26.64 It was also a Ugandan and Diamond League record.