PARIS (AFP) - Caster Semenya’s representatives reacted angrily on Saturday (June 15) after the organiser of the Diamond League event in Rabat said the Olympic champion had refused an invitation to run the 800m.

Semenya was free to run after Switzerland’s top court on Wednesday rejected an IAAF request to re-impose rules obliging her to lower her testosterone before competing in certain events.

“She received an invitation but is unable to organise her schedule to come to Rabat,” event organiser Alain Blondel told AFP.

“Caster Semenya did not decline an invitation to run the 800m in Rabat. The Federation made it impossible for her to participate,” it read.

The statements from the two sides largely agreed on the sequence of events but not on who was to blame for the absence of the runner.

Semenya said that she accepted an invitation on June 7 and booked a flight from Paris to Rabat for Wednesday, but on the eve of her departure, Blondel “suddenly informed Caster’s agent that the President of the Royal Moroccan Athletics Federation did not want Caster to run.” 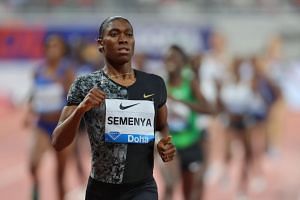 Semenya victimised, vilified for who she is

“Frustrated by this unjustified and belated rejection,” the release continued, “Caster had no choice but to return to South Africa.”

It continued that, after multiple phone calls from her lawyers, the Moroccan athletics federation reinvited Semenya on Friday, but she decided that at that late date, 20 hours of travel “was not rationally possible.”

In a statement posted earlier on Saturday on the event’s official site, Blondel said that organisers had initially refused to allow the South African to take part but, following the Swiss ruling, “they were happy to confirm the invitation.”

Semenya, who won the women’s 800 metres at the 2012 and 2016 Olympics, has been fighting a proposed IAAF rule requiring women with higher than normal male hormone levels, a condition known as hyperandrogenism, to artificially lower their testosterone to compete in races at distances of 400m to the mile.

Semenya took to the track at the Montreuil meeting in eastern Paris last week in the rarely-run 2,000m.

The 28-year-old duly won that race, taking to social media afterwards to say: “They keep talking, I keep winning. Isn’t that beautiful...?”

Semenya, who won the 800m in the season-opening Doha Diamond League, is now slated to run the 3,000m at the Diamond League Prefontaine Classic, exceptionally being held in Stanford, California this year, on June 30.