The 90-minute spectacle featured 661 performers - both able-bodied and disabled - working together across five moments, each with the aim of promoting the themes of inclusiveness and sporting values.

In addition, there were 174 volunteers, 120 crowd motivators, 454 students - from 15 special needs schools - also involved in the production.

They and the 6,000 spectators inside the sold-out Singapore Indoor Stadium were treated to performances by dancers, aerialists and a choir led by hearing-impaired and cerebral palsy students.

From safety lantern to torch

A uniquely Singaporean touch was added to the athletes' parade as the crowd welcomed each of the 10 participating nations with a Kallang wave.

The loudest roars were reserved for the Republic's contingent of 154 athletes, who had the honour of marching in last, led by flag bearer and swimmer Yip Pin Xiu.

This is the biggest squad Singapore has sent to the APG and it will contest all 15 sports offered. 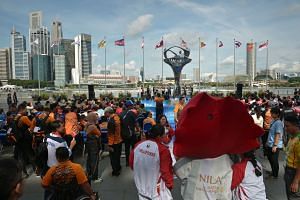 In her opening speech, Minister of Culture, Community and Youth Grace Fu hailed the home team and said: "You have overcome challenges in life and shown us that sport is truly without boundaries. Your fighting spirit will inspire us to live better through sport and spur us to face life's challenges with courage."

As with all opening ceremonies, the night culminated with the lighting of the Games' cauldron and was laced with symbolism.

The athletes' oath was recited by Singapore bowler Thomas Yong.

Joining badminton player Tay Wei Ming and Yip as final torchbearers was nine-year-old Aloysius Gan, who has cerebral palsy. The trio lit the cauldron, signalling the start of the Games.

Said Tay, a multiple APG gold medallist of Aloysius, who plays boccia: "It's very special to have him with us. He signifies the future of para sports."

Added Yip, who is Singapore's first and only Paralympic champion: "I'm so honoured to be here. Winning a medal is a personal achievement but having the APG here is an achievement the country has made.

"It signifies that Singapore is moving forward and stepping into a whole new level for para sports."

It was also a positive start for Singapore's CP football team who beat Indonesia 1-0 as the seven-a-side tournament kicked off on Thursday morning.

There was more good news as sailors Jovin Tan and Desiree Lim, competing in the Skud18 class at the Para World Sailing Championships in Melbourne, secured their spot at next year's Paralympics in Rio

The week-long Games, which ends next Wednesday (Dec 9), will see about 2,000 athletes and officials compete in more than 300 events.

Singapore's best-ever haul was at the inaugural edition in 2001 in Kuala Lumpur, where it won 16 golds, 10 silvers and 11 bronzes.