SINGAPORE - The Ministry of Trade and Industry and the Singapore Tourism Board are working to bring Formula E racing to Singapore for the first time and as early as 2020. If you are not a hardcore motorsports fan, you may not have heard of Formula One's younger cousin. Here are five differences between the two to get you up to speed.

Conceived in 2011 and started in 2014, Formula E has been touted as the future of car racing. Unlike its more famous predecessors - such as Formula One, Two, Three and Four - Formula E uses only low-emission, all-electric vehicles.

The battery-powered Formula E cars are still no match for F1 cars - they are heavier, have lower maximum power outputs and lower top speeds.

However, Formula E cars are gradually closing the gap. In January, Brazilian racing driver and then reigning series champion Lucas di Grassi said that an upcoming second-generation model could exceed 300kmh, up from 225kmh.

While this is still shy of F1's top speed of more than 370kmh, Formula E cars are no slouches either.

2. She is electric, can I be electric too?

Since Formula E's inaugural 2014-2015 season, three women have competed in such races: Katherine Legge from Britain, Michela Cerruti from Italy and Simona de Silvestro from Switzerland. 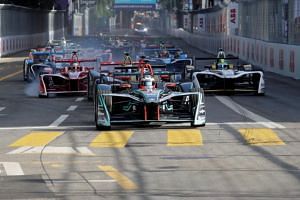 While Legge and Cerruti did not return for the 2015-2016 season, de Silvestro became the lead driver for her Andretti Autosport team, MS Amlin Andretti.

She was the only woman to compete that season, placing ninth out of 16 in two of the 10 rounds, and 18th out of 22 drivers overall.

While F1 drivers use various models, Formula E allows only one standard model, the Spark-Renault SRT_01E. Formula E teams have been giving their drivers two cars for each race.

This is because the car's 28 kilowatt hour battery pack does not hold enough charge to complete the entire race. Drivers switching cars at a mandatory pit stop around the halfway point have become a mainstay of the Formula E races.

This will change from the 2018-2019 season onwards, beginning in December this year. The new "Gen2" model will carry a 54kwh battery pack and only one car will be needed for each race.

Observers have noted that this improvement is a step forward for the legitimacy of electric car racing, which has been marred by scepticism over the power of such vehicles.

Street circuits are public roads used for racing, typically in cities, which are closed off for the duration of the event.

The current season features races on the streets of 10 different cities, including Hong Kong, Marrakesh, New York and Paris.

Compared with purpose-built racing circuits, which are wider and have greater run-off areas, street circuits are narrow and surrounded by barriers, leaving racers with little room for error.

This makes street racing more dangerous for both drivers and bystanders. However, this is where Formula E's lower speeds may be an advantage.

Cities with roads that are too narrow or too dangerous for F1 may be more keen to host Formula E races instead.

For example, the London ePrix, which took place during the Formula E 2014-2015 season, was the first street race held in the English capital in more than 40 years.

The fact that Formula E cars are less noisy and less polluting is also an attractive feature for potential hosts such as Singapore.

F1 may be the elite in car racing, but Formula E is not trying to replace it. Rather, it is pursuing the somewhat loftier mission of promoting zero-emission transport and helping to reduce air pollution around the world.

The FIA, which regulates Formula E races, promotes and celebrates efforts to reduce emissions as it takes Formula E to various host cities. Plans to ban diesel cars have been announced by the mayors of cities such as Paris and Rome, even as they move to host Formula E races.

Fans of Formula E reportedly represent a much younger demographic than F1 fans. The younger generation of motorsports fans are more likely to be conscious of issues such as environmental sustainability.

Formula E championships also act as a driver of innovation in electric vehicle technology. FIA has given big-name car manufacturers such as Porsche and Mercedes-Benz the green light to produce all-electric cars, which will join the Spark-Renault "Gen2" for the 2019-2020 season onwards.