Dr Lee was speaking at the 95th anniversary dinner of the Chinese-language newspaper, which was attended by Prime Minister Lee Hsien Loong, who was the guest of honour, several Cabinet ministers, MPs and top SPH executives.

Dr Lee said that despite the challenging environment for traditional media, Zaobao remains the top Chinese-language newspaper in Singapore. Since August last year, it has had a combined daily circulation of 197,500 copies in print and online.

He also cited last year's Nielsen report on Singapore media, which found that Zaobao has a combined daily readership of 14.7 per cent among Chinese Singaporeans.

Lianhe Zaobao can trace its roots to Chinese daily Nanyang Siang Pau, which published its first issue in Singapore on Sept 6, 1923. 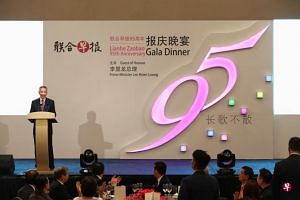 PM Lee: Singapore has developed own version of Chinese culture

Zaobao and its predecessors have weathered many storms in the past 95 years, said Dr Lee, adding that the latest is the digital revolution.

Back in 1995, he said, Zaobao was the first Chinese newspaper in the world to go online. But the advent of social media has changed the way that news is disseminated and consumed.

"These disruptive technologies and developments have made news a commodity, easily circulated and very often for free," Dr Lee said.

"There is also fierce competition between traditional media and new media as a news source, with the latter attracting more readers with sensational headlines, breaking news and in some instances, even fake news."

Even so, Dr Lee assured his audience, the paper is "well equipped and determined" to face these new challenges.

For example, said Ms Ang Yiting, who is editor of SPH's Chinese Media Group Digital, Zaobao has gone big on videos of every stripe to appeal to younger audiences. These are not limited to daily news, but include live videos, lifestyle features and animated content, she added.

One of its big hits is an animated series about a young boy who learns about Chinese culture and traditions. Another series, called Live Your Dream, focuses on helping people fulfil their hopes.

"For example, we had an old man whose wife had dementia, and he wanted to retake their wedding photos in the hope that she would remember," said Ms Ang, who oversees Zaobao.sg

She added: "We look at interactive formats that help us to capture new audiences as well."