Singapore has come far in offering a diverse range of opportunities for students. But the Government also has to be mindful not to "over- plan" and instead, give youth ample space to chart their own paths towards their goals.

Acting Minister for Education (Higher Education and Skills) Ong Ye Kung highlighted this point yesterday in his closing remarks at The Straits Times Education Forum 2016, which saw spirited exchanges emerge with about 250 participants over issues such as the relevance of university education and how students should be assessed.

Still, the Government can help nudge society away from its fixation on the paperchase by taking practical steps such as the recent expansion of aptitude-based admissions in polytechnics and local universities, said Mr Ong.

When asked by ST senior education correspondent Sandra Davie on how Singapore can evolve from a system that is preoccupied with grades and the type of university degree, Mr Ong said that in the absence of a better metric, academic qualification has been adopted as a proxy to measure employment suitability. This is being corrected at the tertiary level with aptitude-based admissions. But companies also need to change their human resource policies in order for different talents to be valued. Certain government departments, including the Ministry of Education, have already started this, he said. 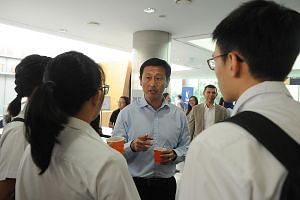 Mr Ong said this is why universities need to stay ahead of change before it becomes "a problem". The premium still placed on degrees here reflects the steps that Singapore has taken to prevent a graduate glut from occurring, unlike in South Korea and Taiwan.

The cohort participation rate in local universities, which currently hovers at 33 per cent, will rise gradually to 40 per cent by 2020, maintaining a balance between meeting aspirations for university education while keeping its value intact.

Weighing in on a question by an SMU student on how university grading can be changed to become more relevant to the industry, Professor De Meyer said that this involves more than just grading students on exam scripts. SMU, for instance, uses peer evaluation within project teams, in which students assess each other based on contribution and capabilities.

Mr Low asked Prof De Meyer if it would be possible for students to obtain academic credits for outside work, for instance an in-depth journalistic feature that is published in ST during an internship. He replied that this was something the university could take into consideration - a flexible approach which Mr Ong said was very encouraging.

But he also steered the discussion on assessment and evaluation towards a deeper point about motivation. "Actually, if you are really interested in journalism, you should be dying to write that feature, whether it will earn you a credit or not... It is important to get evaluated, but also understand that not everything that is important can get evaluated."

While some may point out that it could be tricky for society to embrace change, given that it is a chicken-and-egg situation, Mr Ong is confident that it will happen because of the younger generation's changing view of what is important to them. "My sense, when interacting with them... is that they have much stronger altruistic values. They want to do something different, they want to make life better for the person next to them."

ST editor Warren Fernandez said that the insights shared at the forum made for "a very lively discussion with our audience".

"This is precisely what the ST Education Forum is meant to be - a chance for our readers to engage on a topic that matters to them," he said.

In partnership with SMU

A version of this article appeared in the print edition of The Sunday Times on June 26, 2016, with the headline 'Youth must chart own paths'. Subscribe
Topics:
More
Whatsapp Linkedin FB Messenger Telegram Reddit WeChat Pinterest Print Purchase Article Copy permalink