SINGAPORE - As Singapore prepares to nominate its hawker culture for inscription into Unesco's Representative List of the Intangible Cultural Heritage of Humanity, some young Singaporeans have stepped up to lend their support to the bid.

One of them is Miss Poh Huan Rong, 19, a third-year business and social enterprise student from Ngee Ann Polytechnic.

She was in Shanghai for six months on an internship last March and while there, found herself craving her favourite char kway teow.

After three months, she finally found a restaurant serving the dish - but it was too salty and the noodles "didn't taste right".

She said: "I even tried cooking it myself, but they don't sell the right kind of noodles or sauce there. Only when I came back to Singapore could I have a proper plate of char kway teow."

The restaurant environment was also a far cry from the casual familiarity of the Clementi hawker centre where she often had supper with friends after their co-curricular activities, she said.

This experience made her realise the importance of not taking Singapore's hawker culture for granted.

When she returned, she signed up as a volunteer for the Our SG Hawker Culture travelling exhibition to showcase hawker culture and encourage members of the public to pledge their support for the nomination. 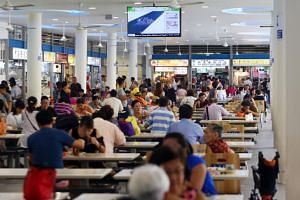 Spirited debate on hawker culture shows investment in its survival: National Heritage Board

The Straits Times says: Hawker centres as a cultural institution

Since its launch in October last year, the exhibition has garnered more than 220,000 pledges online and at various venues around the island.

Passers-by can also hit a button at the exhibition to signal their support without penning a full pledge.

On Sunday morning (Jan 13), Miss Poh was at Yuhua Village Market and Food Centre in Jurong East, where the exhibition is currently being held until Monday, along with first-year culinary and catering management students Keisia Lim-Urquhart and Vivian Zhu from Temasek Polytechnic.

They had breakfast and chatted with Culture, Community and Youth Minister Grace Fu, who was there to pen her own support.

Ms Fu wrote that she supports the nomination because hawker culture "is an important part of our lives".

Miss Lim-Urquhart, 17, and Miss Zhu, 18, both researched hawker food as part of a project on local breakfast food.

Miss Lim-Urquhart said she chose to study mee siam, as it is a part of her Nonya heritage. Her mother is part Peranakan and her father is a Scottish Canadian.

She said: "The many variations of dishes like mee siam show the diversity in Singapore. Malay hawkers don't add coconut milk to the gravy. And with nasi lemak, Chinese hawkers introduced luncheon meat."

Miss Zhu said she learnt from one hawker how nasi lemak was created by Malay settlers living by the sea who made use of coconut as an ingredient because it was abundant.

She said: "With better understanding, you also learn to appreciate it more. Hawker food is more expensive now, but is still affordable.

"Paying more is a way to keep the culture sustainable because rentals and ingredients are also more expensive."

The Our SG Hawker Culture exhibitions will continue to collect pledges from the public until March, when the nomination will be submitted to Unesco.

The exhibition will move on to Toa Payoh Hub Atrium and Velocity Mall from Tuesday to Jan 20.

Details about upcoming locations can be found on the Our SG Heritage website.