SINGAPORE - Seven in 10 young people are unsure or do not think the tertiary education they receive in Singapore prepares them sufficiently to join the workforce, according to an online poll.

The finding from a 2018 survey by Youth.SG, a portal supported by the National Youth Council (NYC), was reaffirmed at two dialogue sessions on lifelong learning, also held last year, for people aged between 15 and 35.

One dialogue participant, Ms Nirmal Bhai S. Sundramoorthi, a pharmacy technician, recounted how a gap in her knowledge kept a patient waiting.

The patient told her about his medical allergies after she had handed him his prescribed drugs.

In such a situation, her lecturers at a local polytechnic had told her to just consult the doctor for an alternative medicine.

"But at work, I found you first need to know what's available in the pharmacy because the doctors will ask you to suggest an alternative. It took me some time to find the alternative, causing the patient to wait longer than necessary," said the 24-year-old.

The episode drove home to her the importance of continuous learning, she added.

The account was among the highlights of a new NYC online report on the ongoing dialogue series called Youth Conversations that was launched last April. It covered such issues as success, mental health and environmental sustainability.

In all, almost 3,000 youth were involved in 30 discussion groups and more than 5,000 youth in online polls. 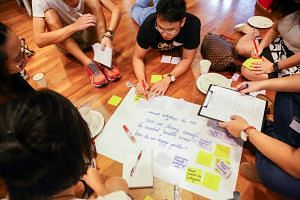 Of these, almost 70 took part in the two dialogues on lifelong learning.

Young people are interested to talk about jobs: Polls

Like Ms Nirmal, most agreed that they have to continually acquire new skills and knowledge to keep up with the rapid changes in industries.

But they worry that they may not have enough time or energy to pick up new skills while holding down a full-time job.

Responding to the youth's views on education, Associate Professor Mary Anne Heng of the National Institute of Education said there are several important skills students must retain from school.

"It is important for students to develop critical soft skills such as resilience, the ability to deal with ambiguity, uncertainty and failure as such human skills cannot be replicated by technology," Prof Heng, who is a faculty member at the institute's Curriculum, Teaching and Learning Academic Group, told The Straits Times.

On success, the NYC report said the Youth Conversations revealed that young people look beyond just attaining good jobs and financial security. Instead, they strive for non-conventional goals, such as personal development, emotional well-being and seeking a greater purpose in life.

This was based on responses from almost 160 dialogue participants and more than 500 online respondents.

Among them was Ms Cindy Chng, 29, a Temasek Polytechnic adjunct lecturer who credits the dialogues on success for her return to community work.

In October 2018, she became a co-founder of social enterprise Trifam, which helps people with disabilities find jobs by matching them with homes and businesses that require specific skills that they possess.

"I asked myself if I wanted to do more community work or continue with my career progression. After Youth Conversations, I had clarity of my own values. I wanted to be part of another social enterprise because serving the community is the way I define myself," said the 29-year-old who teaches entrepreneurship at Temasek Polytechnic.

Previously, she ran a social enterprise that organises environmentally-friendly trips to countries in South-east Asia and hires villagers as tour guides and hosts.

The dialogue series will be held yearly and the findings will be used by the Ministry of Culture, Community and Youth, which oversees the NYC, to produce an initiative that will let young people work with the Government to find solutions to the issues they care about.

The SG Youth Action Plan, which will begin with a selected youth panel this year, will help to crystallise a youth vision for Singapore in 2025.

Correction note: An earlier version of the article misstated Prof Heng's role at NIE's Curriculum, Teaching and Learning Academic Group. She is a faculty member there. We are sorry for the error.