Xinyao singer Dawn Gan has died at the age of 55 after a battle with cancer.

The singer revealed in 2016 that she had five operations to remove tumours and a part of her lung.

Veteran xinyao singer and producer Billy Koh, in his 50s, confirmed the news of her death. He told The Sunday Times that he and Ms Gan were classmates at River Valley High School. "Dawn and I were xinyao pioneers in the early 80s," he said.

Xinyao is a genre of local Mandarin folk-pop music popular in the 1980s and 1990s.

Xinyao concert organiser and TCR Music Station founder Cai Yiren, 53, who has known Ms Gan for over a decade, said he heard about her death from friends yesterday. 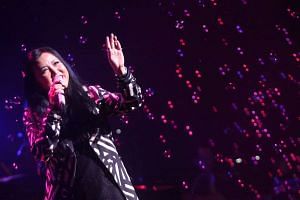 Ms Gan had been based in Hong Kong in recent years. She was married to a businessman, with whom she has three adult children.

Mr Cai, who has been organising the annual Xinyao Reunion Concert series since 2008, said he invited Ms Gan to this year's concert but she declined for health reasons. Despite her illness, she had taken part in the concerts in previous years.

Ms Gan's xinyao hits include Water Tales and Your Reflection, and she won fans with her bright voice and personality. She was also known for Youth 1 2 3, the theme song for the Channel 8 show, Happy Trio (1986).

Mr Cai said: "I invited her every year, this was the first year she could not come. She told us she had to rest. She was a nice, cheerful, loving person. We've sung xinyao together for so many years, it's quite sad to receive this news."