SINGAPORE - More than a year after the Ministry of Health declared a "war on diabetes", public awareness of diabetes has increased, Senior Minister of State for Health Amy Khor has said.

Dr Khor told The Straits Times on Sunday (Nov 12) at an event marking World Diabetes Day: "Increasingly, we can see that a lot more people are aware. The take-up for the DRA is pretty good," she said, referring to the Diabetes Risk Assessment tool, a quick online questionnaire. Since its launch on Sept 1, about 44,000 users aged 18 to 39 have used the DRA. Around one-fifth were found to be at higher risk.

"The awareness is there, but we must continue to put in the effort to get the public to take action," added Dr Khor. She was unable to reveal figures.

In April last year, Health Minister Gan Kim Yong declared war on diabetes, describing it as one of the biggest drains on the healthcare system here. The Health Ministry has pushed a three-pronged plan, including public education on healthy living and how to avoid getting diabetes, screening to identify diabetics early, and helping those who are diabetic manage the disease to prevent or delay complications.

Women are the focus of this year's World Diabetes Day. Dr Khor said during her speech at the event: "Women play a key role in taking care of our families and wield a significant influence over the dietary and lifestyle habits of our family members.

"If we lead by example in living a healthy lifestyle, our family members and friends may be inspired to do likewise."

World Diabetes Day, which falls on Nov 14, is an annual event marked globally. This year's theme is Women and Diabetes - Act Today to Change Tomorrow. 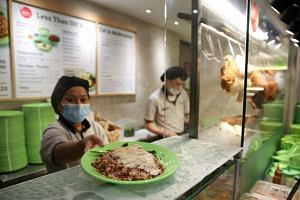 5 tips on how to eat healthy on a budget

It was organised here by the Diabetic Society of Singapore.

Dr Khor noted that women have to juggle many different roles - in the workplace, caring for their children and their parents.

"We may believe that it is too difficult to find the time and energy to exercise. However, we can start by making many simple adjustments to our lives."

Dr Khor, who also said that healthier food need not be more expensive, pointed out that one aspect of disease is unique to women - gestational diabetes. This is when high blood sugar develops during pregnancy.

Almost 20 per cent of pregnant women here are affected by it, leaving them at an increased risk of complications during pregnancy and at delivery.

They are also more likely to develop gestational diabetes in subsequent pregnancies, and get Type 2 diabetes later in life. Type 2 diabetes is when a person's body either resists the effects of insulin, or does not produce sufficient insulin to maintain a normal glucose level.

Dr Khor urged women between 18 and 39, particularly those with a history of gestational diabetes, to fill out the DRA questionnaire.

Those found to be at a higher risk will be invited for a screening and follow-up consultation with their Community Health Assist Scheme general practitioner. A screening test and first post-screening consultation would cost up to $5.

To encourage more women with a history of gestational diabetes to go for screening, the Government is thinking of giving them access to screening subsidies without them having to complete the assessment questionnaire, Dr Khor said.

More than 400,000 Singaporeans live with diabetes, with one in three having a lifetime risk of developing it.

Sunday's day-long public event at the Suntec Singapore Convention and Exhibition Centre featured exhibition booths, free eye tests by the Singapore National Eye Centre, chronic health screening, a series of talks on topics ranging from gestational diabetes to the effects of diabetes on the heart, and technologies in diabetes.