SINGAPORE - A 44-year-old foreign construction worker died after a fall at a worksite in Gambas on Tuesday morning (May 1).

A spokesman for the Ministry of Manpower (MOM) told The Straits Times on Wednesday (May 2) that it was alerted to the fatal accident in a shaft under construction at 2A Gambas Avenue in Woodlands on Tuesday.

"A worker fell through one of the openings and landed 11m below. He was subsequently pronounced dead at the scene," he said.

"The shaft was partitioned into different levels by gratings, and several workers were preparing to install railings around the openings on one of the gratings," he added.

All works within the shaft and all work-at-height activities at the worksite have been stopped and MOM is currently investigating the incident, which occurred at 9.50am.

The police told The Straits Times that they were alerted to an industrial accident at a construction site in Gambas Avenue at 10.12am.

The Singapore Civil Defence Force said it received a call for assistance at 10.15am and immediately dispatched its resources to the scene.

The police spokesman confirmed that "a 44-year old man was found motionless and pronounced dead at the scene by paramedics". They have classified it as an unnatural death and are investigating it. 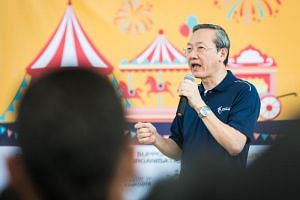 8 workplace fatalities in Singapore for first 4 months of 2018

According to workers at the site, the man, an Indian national in the employ of Ks-Lee Construction, had been wearing safety gear, including a harness, before he entered the tunnel.

The Straits Times also understands that it was his first time working at the Gambas site.

The site is one of six that are part of the Transmission Cable Tunnel Project, which involves the construction of two cross-island tunnels.

The developer of the project is SP Powergrid and the contractor for the Gambas site is Samsung Construction and Trade Corporation (Samsung C&T). Ks-Lee is a subcontractor of Samsung C&T.