People at the park tried to lift the tree off her but failed; cutting equipment used to extricate her

A woman was killed after a tree fell on her in Marsiling Park yesterday morning.

The Singapore Civil Defence Force said it was alerted to the incident at about 8.15am and found a person trapped under a fallen tree.

Its officers used cutting equipment to extricate her, but she was pronounced dead at the scene by a paramedic.

The police and National Parks Board (NParks) are investigating the incident.

Dr Leong Chee Chiew, NParks' commissioner of parks and recreation, said the 20m-tall Araucaria excelsa tree, with a girth of 1.3m, was about 20 years old and was found to be healthy when it was last inspected in April last year.

Its next inspection was due in October, he added.

"We are sad that there was one fatality. Our priority now is to accord assistance to the family of the deceased," Dr Leong said.

According to eyewitnesses, a loud crack was heard just before the tree fell, pinning Ms Loke under it. About 10 people at the park tried to lift the tree but were unsuccessful.

Secondary 3 student Kayden Teo, 15, said he and a friend were among those who tried to help.

Noting it was sunny and not windy at the time, he said: "We were walking across the bridge (over the lake) and heard a loud crack and a splash. A tall tree fell and we ran over to help a woman who was stuck underneath it." 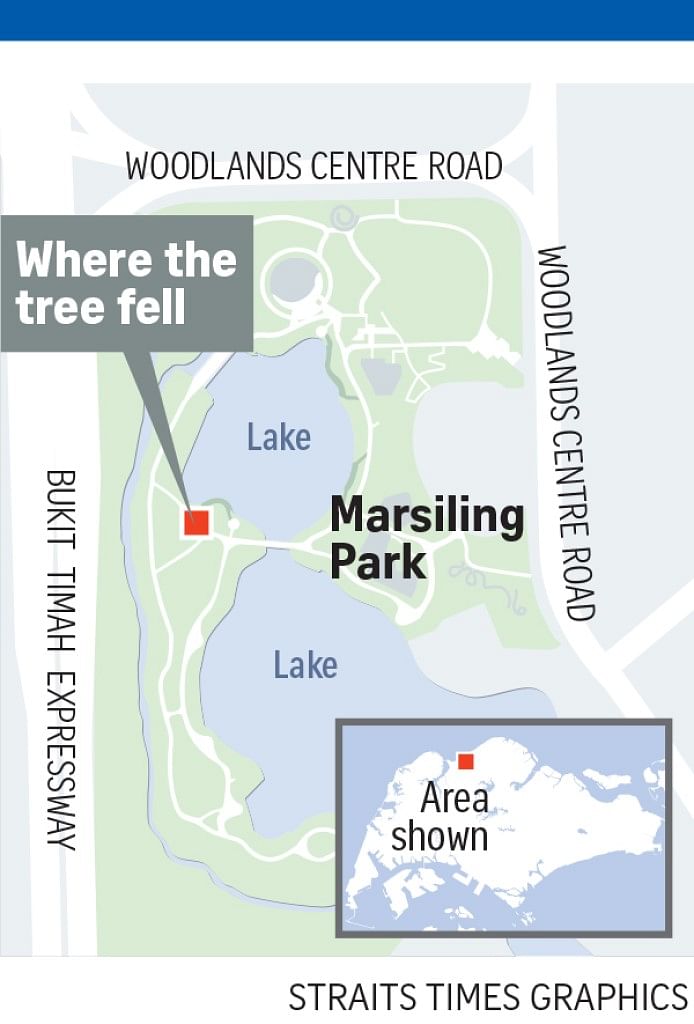 Apart from the police and emergency services officers, the park was mostly empty yesterday morning when The Straits Times visited.

A large section of a walkway had been cordoned off and a blue tent was seen on the path. A large blue tarpaulin was used to cover the area where the tree had fallen, and part of the tree was in the lake.

Dr Leong noted that with the strengthening of NParks' tree management regime over the years, the annual number of tree incidents has dropped from about 3,100 cases in 2001 to about 420 in 2019, and around 340 cases last year.

"NParks inspectors, many of whom are certified arborists, are trained to examine trees in a rigorous and systematic manner, by assessing their overall form, roots, trunks, branches and crown," he said, adding that trees are generally inspected once in six to 24 months, with the frequency depending on the locality and age of the trees.

Trees are regularly pruned to improve their structure and balance, and this is stepped up during periods of adverse weather conditions to reduce the risk of tree failure incidents, said Dr Leong.

Dr Shawn Lum, a senior lecturer at Nanyang Technological University's Asian School of the Environment who has 30 years of experience studying trees, said he could not recall hearing about prior incidents of Araucaria excelsa trees - also known as the Norfolk Island pine - falling.

He told The Straits Times: "I don't think it was a case of (NParks) neglecting a tree that is known to be a danger to the public... NParks has experienced people using very state-of-the-art equipment, which makes the incident even more unfortunate and quite baffling."

After seeing pictures and video clips of the fallen tree, Dr Lahiru Wijedasa, a former senior arborist at the Singapore Botanic Gardens, said the tree looked "healthy and vigorous", and it is unlikely that its structural failures could have been detected.

He added: "It was a structural failure here, so whether it was windy or not, the tree had been compromised and would eventually have failed.

"If you want a city with trees to cool the city, there is always an inherent risk, and we can only minimise the risk, not eliminate it."

In a Facebook post, Senior Minister of State for Manpower Zaqy Mohamad, an MP for Marsiling-Yew Tee GRC, expressed his condolences to the family of Ms Loke, who is a resident of his ward.

"While investigations are ongoing, I have asked NParks to check and review the condition of the trees and the safety of facilities in the area," he wrote in a Facebook post yesterday.

He said he also uses the park, adding: "It is important that we do our utmost to ensure the safety of all users of Marsiling Park."

Dr Leong said that as a precautionary measure, NParks checked the trees in Marsiling Park yesterday. "The park remains open and is safe for the public to visit," he added.

Ms Loke's friends, who knew her as Dag, were shocked to hear of her death. They told The Straits Times that she was a motorbike lover and had recently started exercising to keep a new year's resolution.

Mr Wang Yinghao, 33, who works at a motorcycle shop, described her as friendly and easy-going. "She used to come to the shop once a month to do maintenance work on her Yamaha FZ150i bike," he said.

"She was a very nice person... We would talk about work life and motorcycles whenever she came in."

Ms Loke was with Mediacorp for almost six years, the broadcaster said, adding that it has reached out to her family to offer condolences and support.

It said in a statement: "She was someone that many of her teammates and colleagues looked up to."

A version of this article appeared in the print edition of The Straits Times on February 19, 2021, with the headline 'Woman dies after being trapped under fallen tree'. Subscribe
Topics:
More
Whatsapp Linkedin FB Messenger Telegram Reddit WeChat Pinterest Print Purchase Article Copy permalink