SINGAPORE - A female passenger who hailed a taxi at Golden Mile Complex on Tuesday (Oct 15) was in for an unpleasant surprise when she found several cockroaches inside the vehicle.

Ms Tang Ru Ting, who had taken along her packed lunch for the ride to People's Park Complex, was shocked to see a cockroach crawling out of the seat in front of her a few minutes after she got into the red cab.

The 31-year-old sales executive later realised the insect was but one of many crawling in the taxi.

In a video she submitted to citizen journalism website Stomp, at least seven bugs can be seen crawling in the vehicle, such as the back of a seat and an armrest. It is not clear if all the insects are cockroaches.

"There were many cockroaches and they were crawling on the passenger seat in front of me. I told the taxi driver about the cockroaches and he said they could have come out because of the rain," Ms Tang told The Straits Times on Thursday.

She said that the taxi driver was also surprised when she told him there were many of them.

The taxi company, Trans-Cab, said it is investigating the matter.

Passenger discovers family of bugs in taxi during ride 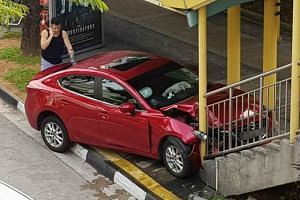 Cockroach in car gives woman a fright, causing her to crash into overhead bridge in Jurong East

Ms Tang had initially left her food on the floor of the vehicle but, after seeing the cockroaches, decided to place the packed lunch on the seat next to her as the vehicle passed the National Library Building in Bras Basah, hoping the insects would not continue crawling about in front of her.

However, as the taxi passed by Clarke Quay Central, some cockroaches crawled onto the seat next to her.

Reduced to tears, Ms Tang decided to cut her ride short and alighted before Chinatown Point.

"This has never happened to me before and I was shocked," she said.