SINGAPORE - Windsor Nature Park was opened by National Parks Board (NParks) on Saturday (April 22), with three new trails and a 150m-long sub-canopy walkway.

The 75-hectare park is the fourth of five buffer parks at the Central Catchment Nature Reserve, the largest nature reserve in Singapore.

Here are some things you can do at the new park, as well as other green areas in Singapore.

1. Take any of the three trails at Windsor Park

The newly opened Windsor Park, at 30 Venus Drive, has three trails for visitors to explore. Take a walk through fauna under the canopy or treetop level along the Drongo Trail's sub-canopy walk.

The walk offers views of the regenerating secondary forest, and the trail goes on for 2.2km or about an hour. 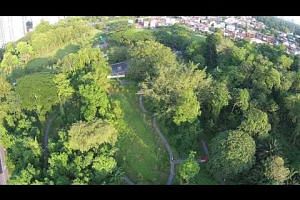 The two other trails are the Squirrel and Hanguana Trails. The Hanguana Trail is rated the easiest on NParks' site, and visitors will be able to complete the 350m route in about 10 minutes.

The full trail - covering all three trails and linking up with MacRitchie's treetop walk - is 7km long and should take three to four hours.

Several species of birds live at Windsor Park, so it is good to have a pair of binoculars. A total of 392 bird species have been recorded in Singapore, according to a post on NParks' site, last updated in February this year (2017).

Sunda pangolins can also be found. Singapore is home to a diverse array of plant and animal life, despite its limited land area.

Check out the marsh habitat and several freshwater streams that weave through the park, as well.

Remember to abide by NParks' recommended trail etiquette, though.

This includes not feeding wild animals, not releasing any animals such as terrapins or pet fish, not fishing or poaching. You should not pluck plants too.

3. Go cycling along the park connectors

Grab a bicycle and cycle from park to park using the extensive Park Connector Network around the island.

The Central Urban Loop or "Makan Trail", for example, starts from Toa Payoh, going through the Toa Payoh Town Park and past several food centres, ending at Punggol Park via the Serangoon Park Connector.

The North Eastern Riverine Loop goes through the heartlands of Buangkok, Sengkang and Punggol and into Punggol Beach and Lorong Halus Wetland.

Along the way, keep an eye out for butterfly-attracting plants along the Punggol Park Connector and a Fruit Tree Trail.

4. Join any of the free nature tours

Next Saturday (April 29), NParks is organising a free 1.5 hour-long Trees of the Fort Tour, where nature guides introduce Singapore's heritage trees and other trees like the Kapok, Gelam and Madras Thorn.

Registration closes on Sunday (April 23) or when registration is full.

The various parks offer many photography opportunities - from lush plants to hard-to-spot animals.

Rare migratory birds such as the Nordmann's Greenshank and the Chinese Egret can be found at Sungei Buloh Wetland Reserve, with a bit of luck.

Chek Jawa Wetlands and Pulau Ubin each have their special array of animals, from Oriental Pied Hornbills to fiddler crabs.