SINGAPORE - The strongest wind gust in eight years was recorded during Friday's thunderstorm which wrought damage to several farms in Lim Chu Kang.

Wind speed hit a high of 133.3kmh in Tengah at 3.50pm on Friday (March 30), said the Meteorological Service Singapore on Saturday.

"This is the strongest wind gust recorded at our islandwide network of wind sensors since 2010," it said. Meanwhile, the highest recorded wind gust is 144.4kmh, also in Tengah, on April 25, 1984.

Several farms, ranging from a chicken farm to plant nurseries, suffered damage when widespread thundery showers fell over Singapore between 2.10pm and 5pm on Friday. Rain was heaviest over the western parts of the island around Jurong and Choa Chu Kang, said the meteorological service.

Dr Koh visited affected farms in Murai Farmway near the Lim Chu Kang Cemetery earlier in the day, along with chief executives of the Agri-Food and Veterinary Authority of Singapore (AVA) and the National Parks Board (NParks), as well as key members of the Singapore Agro-Food Enterprises Federation.

On top of AVA and NParks, Singapore Land Authority and the Building and Construction Authority will also step in to help, said Dr Koh in a Facebook post.

"The farmers shared with me that they now see the unpredictable and damaging effect of more extreme weather patterns on their livelihood due to climate change and are determined to leverage better technology to mitigate against disruptions," he added.

When contacted, AVA said on Sunday that it is currently assisting Chew's Agriculture with its clean up and recovery operations. 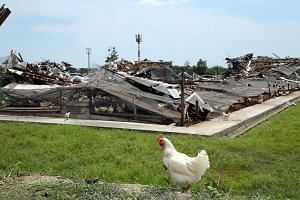 Govt to help with cleanup, rebuilding of damaged farms

A 38-year-old worker at a plant nursery was taken to hospital for minor injuries.

At Chew's Agriculture, stray chickens were seen among the debris which was their home less than a day ago. The chicken farm declined to comment.

A factory employee who declined to be named said the rain, which started before 4pm on Friday, came in "like a tsunami".

"Many chickens died. Some escaped," he said.

Said another worker from Chew's: "Suddenly, the tin houses on both sides of the road started shaking. Everyone went inside, nobody dared to go outside. In 15 minutes, the trees started falling down."

Tucked away in a side alley, Sevenseas Fisheries suffered fewer battle scars than its neighbour. But the fish and frog farm will still need at least two weeks before it returns to its former state, said operations manager Bernard Goh.

The family business had to stop all operations on Friday afternoon when the storm tore through its premises. "Yesterday, we totally couldn't operate at all. We are now trying to rush out some major repairs so operations can run," said Mr Goh on Saturday.

Damage includes broken water pipes and electric cables, cutting off the farm's water filtration system. The automated system supplies fresh water from a larger reserve pond to the farm's fish and frog ponds. It now has to use a handheld pump, which supplies only 20 per cent of the original volume of water.

The storm also ripped the roof off its frog enclosure.

As a stopgap measure, Mr Goh laid wire mesh on the top to ward off direct sunlight. Roof repairs for the enclosure will be done next week.

But Mr Goh is afraid poor weather in the week ahead will spawn a nightmarish rerun of Friday's events.

"We are scared it will rain again today. The weather forecast says it will rain this whole week in the afternoon," he said on Saturday.