SINGAPORE - A WhatsApp message claiming that temperatures in Singapore will hit 40 deg C in the next five days is false, the National Environment Agency (NEA) has said.

The message claims that the "equinox phenomenon" will cause temperatures to rise to 40 deg C in the next five days.

It warned recipients to stay indoors at midday, and drink 3 litres of water a day to avoid dehydration and heatstroke. 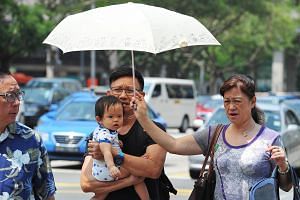 The agency clarified on the gov.sg website on Thursday (March 17): "NEA is aware of a message circulating via text messaging and social media platforms which claims that temperatures are expected to soar to 40 deg C in the coming days, resulting in a possible heatwave leading to dehydration and sun stroke. These claims are untrue."

The latest weather advisory by the Meteorological Service Singapore (MSS) said that the second half of March will be drier and warmer, but the daily maximum temperature is not expected to be as high as 40 deg C.

The warm conditions are indeed due to the equinox, which falls around March 20 and Sept 22 each year.

This year, the El Nino phenomenon and the presence of a dry and warm air mass over the region are also contributing to the heat.

The MSS also forecast short showers in the afternoon on four to six days in the latter half of March.

Meanwhile, the Ministry of Health issued a health advisory on Thursday about dealing with the warm weather.

Advice includes wearing loose, light clothing, drinking more water, and staying out of the sun during the hottest hours of the day.

The Ministry also highlighted symptoms that can be brought upon by excessive heat including headaches, nausea, dizziness, fainting, disorientation or confusion and dark-coloured urine, among others.