SINGAPORE - A wild crocodile has died from its injuries after being involved in an accident along Kranji Way on Wednesday (July 5) evening.

The reptile, said to be 1.5m long, was hit by a car at around 10pm near the Kranji Dam, Shin Min Daily News reported.

In response to queries from The Straits Times, an Agri-Food and Veterinary Authority (AVA) spokesman said the crocodile died on Thursday morning.

"AVA is aware of the crocodile incident, and understands that it was a wild crocodile," the spokesman added.

"AVA advises the public not to approach, disturb, feed or try to catch any wildlife, including crocodiles. Members of the public can contact AVA at 1800-476-1600 to provide feedback."

According to Shin Min, a member of the public alerted the police after coming across the injured crocodile.

Police officers arrived on scene and cordoned off the area. It is not known how the crocodile ended up on the road. 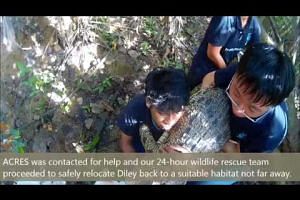 A staff member from a nearby crocodile farm offered to tend to the reptile. With the help of a few colleagues, they took it back to the farm for treatment.

Wildlife rescue group Acres told The Straits Times it was alerted to the incident, but did not respond to it as it was told the situation was under control.

Acres' deputy chief executive, Mr Kalai Vanan Balakrishnan, said it is rare for wild crocodiles to encroach onto urban areas as they are usually very shy.

There have been crocodile sightings in the Kranji Way area, however, because of its proximity to Sungei Buloh nature reserve.

In November last year, a 2.5m-long estuarine crocodile wandered into a Lim Chu Kang fish and had to be rescued after being found wedged between a fence, some wood and machinery.

It did not suffer any injuries and was released into Sungei Buloh nature reserve.