The wild boar attack on an administrator from Punggol Secondary School on Tuesday left her with vicious bite marks and lacerations on her back, arms and legs.

According to Chinese newspaper Shin Min Daily News, the woman was pregnant but her foetus was unharmed in the attack.

Chinese evening daily Lianhe Wanbao identified the woman as 32-year-old Alice Ng, who was attacked at Edgefield Plains in Punggol.

Recounting her ordeal from her hospital bed in Khoo Teck Puat Hospital on Wednesday, Ms Ng said she did not provoke the animal and found out there were wild boars in the area only after the attack.

Ms Ng, who is expected to be discharged next week, told Wanbao: "I was listening to music on my earphones. A strong force then knocked me down from behind."

She added: "Only when I was knocked to the ground did I realise that it was a big wild boar."

The frenzied boar charged and bit her repeatedly, Ms Ng recounted, tearing her blouse and gashing her on the back. Dazed, bleeding and in pain, Ms Ng said she had no strength to escape. 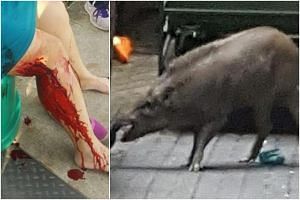 Punggol wild boar attacked pregnant woman from behind, was not provoked, says husband

A passing cyclist then tried to use his bicycle to scare the boar away. Another passer-by called an ambulance.

Two Punggol Secondary students rushed to the scene and used the lid of a nearby rubbish bin to help the cyclist protect Ms Ng until the animal scampered off.

As the attack occurred just outside her school, Ms Ng told Wanbao: "Now I'm worried there will be danger for the students. There is also a pre-school opposite and if the young children were attacked, the consequences would be unimaginable."

The Agri-Food and Veterinary Authority (AVA) said yesterday that it had received about 150 cases of wild boar-related feedback islandwide from January to July this year.

"The public must do their part by not feeding wild animals and ensuring proper food-waste disposal, as irresponsible feeding alters their behaviour and causes them to be reliant on humans for food, which may lead to human-animal conflicts," AVA said.

Correction note: An earlier version of the story stated that in Punggol, 33 cases of wild boar-related feedback were reported in the first seven months of this year. It should be 31 cases. We are sorry for the error.