SINGAPORE - While Senior Lieutenant-Colonel Loh Mun Heng is fond of whiskey, he was determined not to receive a bottle of it during the six-month-long "Perisher" submarine command course he attended in 2007.

That is because trainees who fail the course - including those who choose to give up at any point - are given a customary farewell of a bottle of whiskey to drown their sorrows on board the ferry back to shore, said STLC Loh in an e-mail interview on Thursday (Feb 14).

"I was determined not to receive that farewell. It dawned upon me that the submariner's competency and character are key to the submarine's mission success," he said.

SLTC Loh, 46, shared his experiences with Singapore media ahead of the launch of the Republic of Singapore Navy's (RSN's) first newly built submarine, the Type 218SG, by Defence Minister Ng Eng Hen in the city of Kiel in Germany on Monday (Feb 18).

He was the second of two officers from the RSN who have been sent to the Royal Netherlands Navy Submarine Command Course so far, which trains submariners to become commanding officers.

Both passed the course, which is known for its high failure rate of more than 50 per cent. The RSN is the first Asian navy who have sent personnel that have passed.

SLTC Loh said that throughout the course, he was stress-tested to his limits, especially mentally. 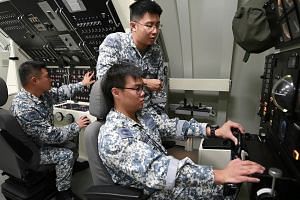 A rare look at RSN submarine training: Crew can now take out adversary within minutes

"But I persevered and overcame the difficulties because I knew I was carrying the reputation of our submarine force on my shoulders," said the former commanding officer of the Archer-class submarine RSS Swordsman from 2008 to 2016.

The final phase of the course was a month-long sea exercise on board the Dutch submarine Walrus, he said, where trainees are assessed on their tactical competencies in leading the ship to perform navigation and intelligence operations.

This was done in the presence of opposing forces such as frigates, helicopters and maritime patrol aircraft.

"We had to navigate the shallow waters safely around the Scottish island of Arran without GPS. In addition, we had to evade and remain undetected by the exercise opposition, who were given an approximate time and area where the Walrus would be," he said.

SLTC Loh, as chief trainer of the RSN's submarine force, is responsible for the training system to ensure there is sufficient numbers of well-trained submariners.

He has adapted aspects from his experience in the Perisher course to the RSN's training system, with local qualification courses redesigned to teach beyond technical skills, to develop skills such as mental agility, situational awareness and command presence.

"To me, the term 'Perisher' is more than a gruelling course. It is an attitude, a spirit, if you will."