SINGAPORE - The Republic and other like-minded countries are "very concerned" about the softening stance by some nations towards drugs, especially cannabis, which is the most widely used drug around the world, said Senior Parliamentary Secretary for Health and Home Affairs Amrin Amin on Wednesday (Nov 27).

He cited six recommendations made earlier this year by the Expert Committee on Drug Dependence (ECDD) under the World Health Organisation (WHO) to make changes to the international scheduling of cannabis and cannabis-related substances, which would allow for them to face less restrictions in medical and research use.

Speaking at the 13th Asean Ministerial Meeting on Transnational Crime in Bangkok, Mr Amrin said these recommendations, if accepted by the 10-member Asean grouping and the Commission on Narcotic Drugs (CND), would signal to the world that cannabis is less harmful than before.

He said this would be a wrong message, as there is now robust evidence on the harms of cannabis and the psychological, mental and physical toll it inflicts on the abusers, their lives, work and family, and society at large.

He said the ECDD's proposed rescheduling of cannabis will send the wrong message to the public, especially to our young, against the backdrop of international lobbying efforts to legalise cannabis.

Currently, countries like Canada and Uruguay and more than 10 states in the United States have legalised the use of cannabis, while some closer to home like Thailand have recently allowed for or started discussions on the use of medical cannabis.

"We thus urge all Asean member states to carefully assess these recommendations and its potential impact on the loosening of international controls on cannabis," said Mr Amrin.

"Asean has consistently taken a unified position that we want a region free from drugs. We should continue on this path to ensure that our communities are safe from drugs, and that our future is safeguarded."

Similarly, the region has to also continue in its fight against the threat of terrorism, said Mr Amrin, adding that despite the death of former Islamic State in Iraq and Syria (ISIS) leader Abu Bakr al-Baghdadi last month during a US raid and the loss of its physical caliphate, the group remains a "resilient terrorist force" with significant resources and a global network. 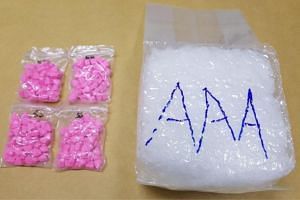 More than 2kg of cannabis and Ice among drugs worth $223,000 seized by authorities

Strict rules on use of medical cannabis: Singapore

Young here more liberal on cannabis than other drugs: Poll

"Its extremist ideology continues to perpetuate in cyberspace and radicalise the minds of its sympathisers," he said.

He also noted the cooperation with regional partners to strengthen counter-terrorism efforts, such as the setting up of Interpol's Asia-Pacific Regional Counter-Terrorism Node based in Singapore which facilitates the sharing and use of intelligence on terrorist activities. He encouraged member states to make use of its capabilities.

Mr Amrin also highlighted the "ever-growing challenge" of cyber crime, saying that because it has no boundaries, cooperation among countries is all the more vital.

Singapore has identified four approaches to maintain a secure and resilient cyberspace environment, he said, which include strong policies and operational competencies as well as boosting partnerships with international and private industry players.

As transnational crime is dynamic and its threats will constantly evolve and bring about challenges of different scale, form and complexity, Mr Amrin said: "As one Asean, we must remain united and resilient against these new and emerging threats."