SINGAPORE - Should those who are privileged give back to society, and why? And who are "the privileged" in Singapore, anyway?

A panel comprising two social workers, a sociology professor and the head of a philanthropic foundation will debate these questions and more on July 2, with the aim of developing actionable ideas to encourage giving.

Organised by The Straits Times in partnership with the Singapore Kindness Movement, the panel will also examine the role of government, businesses and non-governmental organisations, and the practical initiatives to drive donations, volunteerism and philanthropy.

Other topics to be discussed include whether the privileged should be giving more, how they could go about doing so, and whether the act of giving is a purely personal desire based on an individual's own conviction.

Ms Ranganayaki said that she hopes the discussion will lead to a greater awareness of what privilege means.

She added that she believes anyone can give, even a poor person living with a large family.

"Privilege need not mean money... just being there for your neighbour helps. Pause and ask yourself: Am I better off than others, in any way? Then give to them in that way," she said.

She added that she has observed poor communities where there are no fixed "givers" and "takers", but rather an ongoing process of mutual care and everyone giving to each other as they are able.

ST will carry a summary of the discussion on its website and in print on July 3.

More comprehensive coverage of the discussion will appear in The Sunday Times on July 7, with a video available on the ST digital platform on that same day. 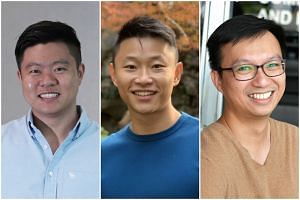 Young, rich and generous: More millennials donating to their universities, some with large sums

Pool of donations gets bigger, though other priorities stop some from contributing

The Singapore Kindness Movement's general secretary William Wan said he hoped that the discussion would cause those in Singapore to reflect on what it means to be privileged, and how they can help others in different ways.

"With self-awareness, empathy and contentment with what we have, we can be more conscious, deliberate and specific in our giving back... together, we can be greater," said Dr Wan, adding that the Singapore Kindness Movement and its partners could link donors to various channels to help those in need.

Last year, Singapore ranked among the top 10 most generous countries in the world for the first time, up from 30th place the year before.

The Republic ranked seventh out of 140 countries in British charity Charities Aid Foundation's World Giving Index 2018, reporting improvements in the number of people who helped a stranger or volunteered.

And on Tuesday (June 25), it was reported that donations to Singapore's national charity portal Giving.sg had crossed the $150 million mark, less than a decade since it was started in 2010.