A formative experience that will inspire them to serve Singapore in their own ways, is how Prime Minister Lee Hsien Loong hopes young people who participated in this year's Bicentennial National Day Parade will remember it.

"Then when we celebrate the 250th anniversary of modern Singapore, they can look back with pride at what they have wrought, even as they in their turn pass on the baton to yet another generation of Singaporeans," said Mr Lee in a note posted on Facebook yesterday.

Mr Lee said he has had the privilege of contributing to Singapore's progress in different roles.

"My most critical duty now is to prepare a younger team to take over from me and my colleagues, so that Singapore will stay secure and successful after we are gone."

Mr Lee's note was a translation of remarks in Chinese he had made to Lianhe Zaobao, which had asked for his thoughts and those of other Cabinet ministers on the theme of chuancheng, a Chinese phrase roughly meaning "legacy" or "inheritance".

In another post, Mr Lee had remarked on how the two Chinese characters packed "so much meaning". "Literally to hand on and to receive, but a better translation would be to pass on something precious from generation to generation," he said.

In his note, Mr Lee also remembered parades past, nearly all of which he has attended since the first in 1966. He recalled being on the Padang as it rained in 1968, playing the clarinet in his school band.

"The parade formation held; nobody ran for shelter. We showed ourselves and the world that Singaporeans had the grit to stand firm in adversity," he said.

"I have watched the National Day Parades become better year by year, as our country developed, the SAF and Home Team upgraded their capabilities and equipment, and our sense of nationhood strengthened," said Mr Lee.

Senior Minister Teo Chee Hean, Deputy Prime Minister Heng Swee Keat and Law and Home Affairs Minister K. Shanmugam were among other members of the Cabinet whose thoughts were published in yesterday's edition of Zaobao as part of its National Day coverage.

Mr Teo, who is also Coordinating Minister for National Security, said that Singapore has always believed in planning for the future.

"Our political succession has been very smooth, just like the past, ensuring continuity and stability. This allows the Government to work closely with the people, carry out long-term plans, and share the benefits of growth," he said.

Mr Heng, who is also Finance Minister, shared his thoughts on passing the baton and the importance of team spirit. He recalled how his predecessor in Tampines GRC, Mr Sin Boon Ann, had taken him under his wing when he started out in 2011, introducing him to residents, and was only a phone call away when needed.

Mr Heng said that when he suffered a stroke, Mr Sin did not hesitate to help, sharing with other Tampines MPs the work of meeting residents weekly. Mr Heng had collapsed during a Cabinet meeting on May 12, 2016, after he had a stroke.

"Boon Ann was a familiar face, providing peace of mind to the residents," he said. "This is team spirit - not just between peers, but a close bond that goes across lines of seniority."

Even after handing over the reins to the next generation, the previous generation can still contribute to nation and society, Mr Heng noted. 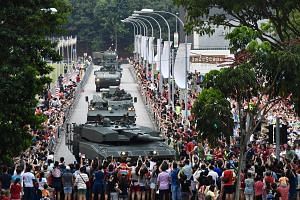 27,000 turn up at the Padang for Singapore's bicentennial birthday bash

"Nation-building is not just the work of one generation, but a ceaseless process passed down from generation to generation. Only by building on the foundations built by our predecessors, and then successfully passing the baton to the next generation, can Singapore continue to be strong, united as one!"

Mr Shanmugam said that, for him, the words chuancheng also included the teachings of predecessors. He recounted how founding prime minister Lee Kuan Yew used the analogy of a tennis match to illustrate how the fruits of societal progress should be shared.

"(Mr Lee) said, if there were a tennis match where only the champion snatched all the prizes, others would very quickly give up on participating. Only those who think they can win will continue," he said.

Only a competition where all participants could win a prize, but corresponding to each individual's performance, can encourage people to participate, Mr Lee had said.

"Mr Lee said Singapore's system needs to be as such, let people maintain the desire to succeed, but not leave behind those who do not perform as well," Mr Shanmugam said.