A project to map out wheelchair-friendly routes in the Central Business District (CBD) is on the cards.

The Disabled People's Association (DPA) is spearheading the project as it finds the area has too many steps and escalators, preventing people with disabilities from going to work or finding work there.

Dr Marissa Lee, DPA's executive director, noted that there is now a major push for companies to hire people with disabilities.

While employers often check if their own buildings cater to those with disabilities, they do not think about "the areas of transition - whether wheelchair users can get from the public transport hub to their offices", she pointed out.

The DPA plans to approach university or polytechnic students to map out wheelchair-accessible routes, or the lack of it, in the CBD in the next few months.

The map will be presented to stakeholders of the area and published on DPA's website.

A similar project in the 1990s resulted in changes in Orchard Road.

At that time, it was hard for wheelchair users to make their way around the shopping belt as most malls had short flights of steps leading to their entrances, and pedestrian walkways were not level with the roads.

So a university lecturer in architecture and his students took officers from the Public Works Department for a walk in Orchard Road and mapped out routes that were not accessible to wheelchair users.

Obstacles were removed or corrected, and a map of the accessible routes in the area was included in a Singapore Tourism Board booklet.

The DPA hopes the mapping of the CBD area will also lead to changes in infrastructure.

At Raffles Place MRT station, for instance, the station map indicates nine exits from the underground passageways to buildings or the street level via stairs.

But for wheelchair users, who can use only the lift, the map shows just one way out, via Chevron House.

Accessibility consultant Judy Wee, 56, who was born with limb deformities and uses a wheelchair, said many wheelchair users avoid the CBD as they find it a labyrinth.

She was involved in the Orchard Road project and will be working on the CBD one.

Ms Amanda C, a wheelchair user in her 20s who works as a bank analyst at One Raffles Quay, usually takes the Downtown Line to work.

"There are lifts at the Downtown MRT station for me to go up to street level to get to work. But if it rains, I have to use an alternative route that involves stair lifts and those sometimes break down, so I find myself getting drenched many times," she said.

The bugbear for Mr Stanley Lim, 41, is bollards, or metal poles.

Noting there are bollards along the way from Raffles Place to Fullerton Hotel and Boat Quay, he said while these help prevent bikes from going onto the footpaths, they also block wheelchair users.

"My helper will have to push me down the kerb to use the road instead," said Mr Lim, who became paralysed after a motorcycle accident. He is now an artist with Very Special Arts Singapore, a charity.

"My friends asked me out for lunch at a restaurant there and they went on foot to try to find a wheelchair-accessible route from the train station to the restaurant, but failed," she added. 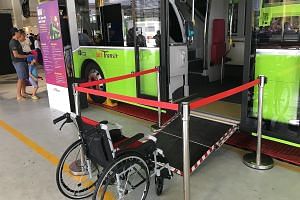 DPA's Dr Lee said it is only by trying to get round with a wheelchair that companies, government bodies and transport providers can better understand the lack of step-free connectivity between buildings.

Different groups, such as the management of buildings, the Land Transport Authority and the Urban Redevelopment Authority, have jurisdiction over different parts of the CBD, she noted. She said DPA hopes everyone will work together to fix the connectivity issues.

Dr Justin Lee, a research fellow at the Institute of Policy Studies, said: "One of the issues raised by those who study accessibility is that it's not about whether the building conforms to some code or standards, but whether it works well for (people with disabilities)."

A good idea, he believes, is to get people to map wheelchair-accessible routes or places in, say, Google Maps.

Google started a campaign last year to tap its army of users worldwide to make its Maps app more useful for those with disabilities.

Added Dr Justin Lee: "It can be powerful when it is crowdsourced, so that the larger community can get involved and contribute to a live and continuously updated map."

Two wheelchair users, one mission and a myriad challenges

Two wheelchair users ventured into the bustling Central Business District (CBD) to get a feel of how they could navigate the place. The Sunday Times' Janice Tai tags along.

Ms Nongnuch Maytarjittipun wheeled herself out of the train onto the platform at Raffles Place. Her wheels sunk briefly in the platform gap, but she exerted enough force to quickly move forward.

She was meeting consultant Judy Wee, 56, and did not want to be late.

Ms Nongnuch, 45, was visiting from Thailand, where she works as the executive secretary of the Asia-Pacific Development Centre on Disability. She was in town to plan for the upcoming True Colours Festival next month, where disabled people from the region will perform at the Indoor Stadium.

Ms Wee, a fellow wheelchair user who specialises in accessibility issues for the disabled, had offered to take her around the CBD for a tour. They met at 6.30pm at Raffles Place MRT station.

The mission for the night?

•Get out of Raffles Place MRT station to the streets;

•Cross the road at Collyer Quay and get to buildings opposite, such as Fullerton Bay Hotel, and

There may be 10 exits at the Raffles Place MRT station, but the map there indicates only one lift that wheelchair users can use to get out.

Ms Wee guided Ms Nongnuch to that lift in Chevron House that took them up to the street. Once out there, wheelchair users can access buildings such as the Ocean Financial Centre and Change Alley.

The first task was completed. Next up, crossing the road.

The two women took the lift at Change Alley, intending to use the OUE Link overhead bridge.

Alas, a short flight of steps at the start of the linkway stopped them in their tracks. "So near, yet so far," said Ms Nongnuch, whose blouse by then was slicked with sweat.

Ms Wee pointed out that the passageway was wide enough for a ramp to be installed. She is the founder of LevelField Consultants and sits on a Building and Construction Authority task force that reviews the Code on Accessibility in the Built Environment.

The two then wheeled themselves back into the lift at Change Alley, making their way down to check out their limited options. The only way to cross, they realised, was to go further up to Fullerton Road where there was a street crossing.

"Even if it rains, this is the only way we can use to get across currently," said Ms Wee as she glanced up worriedly at the darkened sky.

Then it started drizzling and Ms Nongnuch decided to call it a day.

Having visited and studied how disabled-friendly various regional countries are, she said Singapore has done well in small, but crucial, details such as drain covers outside train stations. The slits of the covers are narrow enough so the wheels of wheelchairs do not get stuck.

"But information about where to go to find the lifts or how to get to places if we are on wheelchairs is lacking. In Japan, service staff are always on hand to ask if one needs assistance," said Ms Nongnuch.

Ms Wee wanted to take the train at Downtown MRT station home and she tried wheeling herself in the underground passageways from Chevron House, but her path was blocked by a flight of steps just before an exit to Republic Plaza.

It takes able-bodied people just 10 minutes to walk underground from Raffles Place MRT station to Downtown MRT station, but there seems to be no way wheelchair users can do the same.

Ms Nongnuch resorted to calling for a taxi, while Ms Wee took the East-West Line instead.

Said Ms Wee with a grin: "Every trip in this subterranean maze is an adventure in getting lost."

A version of this article appeared in the print edition of The Sunday Times on February 18, 2018, with the headline 'Wheelchair roadblocks in the CBD'. Subscribe
Topics:
More
Whatsapp Linkedin FB Messenger Telegram Reddit WeChat Pinterest Print Purchase Article Copy permalink