According to three young people nominated for the inaugural Straits Times (ST) Generation Grit Award 2018, the key to picking yourself up in tough times is to allow yourself to cry, but then to reframe your perspective and take ownership of your circumstances.

The three were panellists at an askST @ NLB session, When Life Gives You Lemons, speaking to an audience of 300 at the Central Public Library in Victoria Street.

It was moderated by ST senior social affairs correspondent Theresa Tan, who helms the Generation Grit series profiling inspiring people below the age of 35.

The award was given to three of the 24 nominees last month for inspiring others with their resilience and community spirit.

For Ms Ju Ann Thong, 35, crying helps her let her emotions out and cope with the struggles she faces.

Ms Thong, who fought depression after ending a bad relationship that left her with almost $100,000 in debt, juggles multiple jobs to take care of her three children and cancer-stricken husband. She said: "Some people will think that crying is shameful, but I think it is a symbol of strength."

Mr Delane Lim, 34, agreed that people should not be ashamed to cry as it is a "coping mechanism".

Overwhelmed by health, business and romantic problems, he was once depressed and suicidal. Since overcoming that dark period, he has started a charity, the Character and Leadership Academy, training students to spot signs of depression in their peers and give help. 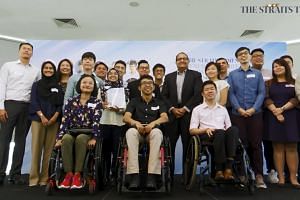 He said in the face of adversity, one should redefine happiness and remain grateful. "Whatever crisis that you face, at the end of the day, just remember you are still breathing. And don't stop breathing."

Choosing to see good amid hardship is something Ms Azlin Amran, 34, learnt to do after an accidental fall into an escalator shaft left her paralysed from the waist down. No longer able to do the things she loved, she felt like a prisoner in her own body without an identity.

But the employment support specialist at SPD learnt that she had to "own (her) circumstances". She said: "I am the one that can make the difference to my life, not someone else." Instead of the past, she learnt to focus on what she can do and discovered that regardless of whether she can walk, she is able to find happiness. She told a rapt audience: "Pain is inevitable, but suffering is a choice."

AskST @ NLB monthly sessions are jointly organised by ST and National Library Board. They are streamed live on the Rings.TV application.

The next talk, Back to School at 50, will be led by ST executive sub-editor Toh Yong Chuan. It is scheduled for June 20 and readers can register at str.sg/askYongChuan

A version of this article appeared in the print edition of The Straits Times on June 01, 2019, with the headline 'What do you do when life hands you lemons?'. Subscribe
Topics:
More
Whatsapp Linkedin FB Messenger Telegram Reddit WeChat Pinterest Print Purchase Article Copy permalink