SINGAPORE - He may live in a corner unit of a Housing Board block in Pasir Ris but for Mr H Q, just getting to the lift lobby is like walking through an overgrown garden.

The 20-year-old, who did not want his full name published, lives next to what neighbours have nicknamed "the jungle house".

Rows of leafy plants are crammed pot to pot in the common space in front of the eighth-floor unit at Block 101 Pasir Ris Street 6.

The Straits Times saw about 40 tall potted plants lining the walkway on Monday (May 27).

A woman in her late 40s, who did not want to be identified, was seen watering the plants and trimming leaves.

Neighbours say the large collection of plants is an obstruction and a fire hazard.

"The plants have been like this for the past eight to nine years," said a neighbour who lives in a maisonette below the unit and also declined to be named.

He said that he sometimes has to trim creepers growing on the balcony of the eighth-floor unit that reach down to his window. The plants also attract red ants, which come into his house.

"The other neighbours and I have approached (the resident of the eighth-floor flat) directly in the past and the town council has contacted her, but nothing much has changed," said the neighbour, who is in his mid-60s.

"The number of plants has reduced recently, though."

The owner has told the ST that she has not been approached by her neighbours, and that if they had done so, she would have been accommodating and made changes.

An eighth-floor neighbour, who wanted to be known only as Mr Lee, said that cleaners occasionally help to remove some of the plants.

The 67-year-old added that the owner has been tending to the plants diligently every morning for many years, and that only the units near the corner are affected.

Mr H Q and his family have few complaints about the plants growing beside their doorstep. 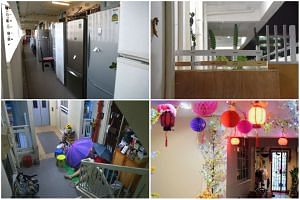 "The owner maintains the plants so that they don't grow into our area," he said, adding that the owner is a keen gardener who is averse to killing the plants because of her Buddhist beliefs.

However, he admits that they pose a safety hazard, and are difficult to navigate through while carrying large items.

A spokesman for Pasir Ris-Punggol Town Council told The Straits Times that it has advised the owner several times to refrain from placing too many potted plants in the common area - although when she has removed the plants, she often returns them later.

The spokesman added that while the town council understands the resident's desire to create a high-rise garden city, it "would like to reiterate the importance for residents to maintain obstruction free passageways".

"This will create a safe living environment for all," he said.