SINGAPORE (THE NEW PAPER) - Eight days after a motorcyclist was knocked unconscious by a falling tree, his loved ones are still waiting for him to wake up.

But even if Mr Lee Kar Choon, 23, regains consciousness, his family members are girding themselves for a worst-case scenario.

Doctors have told them that, at best, he will become a paraplegic and blind in one eye, said his sister, Madam Lee Hui Ting.

He was heading towards Jordon International Food Processing, a ham-and-sausage factory in Woodlands Loop, where he is a general supervisor in production.

The police told TNP that they received a call for assistance at 6.39am, and found Mr Lee unconscious on the road. 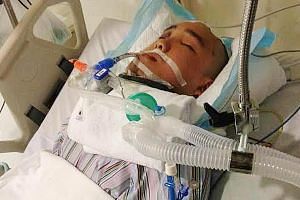 He was taken in a Singapore Civil Defence Force (SCDF) ambulance to Khoo Teck Puat Hospital, where he remains in a coma in the intensive care unit (ICU).

The National Parks Board and Singapore Land Authority said the tree is under their purview, and they are investigating the matter.

Mr Lee’s brother-in-law, Mr Jonathan Poh, 27, told The Straits Times that Mr Lee had surgery to remove a blood clot in his brain.

“The doctor told us that his condition is now stable, but still critical,” he added.

Mr Poh understands that Mr Lee was found with the tree “right beside his head” while his motorbike lay some distance away.

When TNP visited the hospital on Tuesday, his family, including his wife, his two-year-old daughter, mother, two sisters and brother, were waiting outside the ICU.

Mr Lee’s wife, Madam Chai You Yuet, 23, said she had stayed overnight at the hospital.

“When we arrived at the hospital, we still did not know what had happened to him,” she said in Mandarin.

Madam Lee said her brother had serious injuries to his head, jaw, eyes and throat.

“The doctor told us that the best-case scenario is that he will be half-paralysed and blind in the right eye. That’s why we are very worried,” she said in Mandarin.

Mr Lee stopped schooling at 17 and came to Singapore to work as a kitchen helper to ease his parents’ financial burden.

He joined Jordon in 2014, the year his daughter Katherine was born.

Since then, he has taken the same route to and from work.

Madam Chai said: “He would wake up at 5am every day and reach Singapore at about 8am if there was a traffic jam. He would finish work at 8pm if he had to do overtime, and reach home only at about 11.30pm.”

Even before the accident, his family had concerns for Mr Lee’s safety.

His mother, Madam Yeoh Ooi Lai, 41, said: “It is very dangerous for him to ride a motorcycle into and out of Singapore every day.”

Madam Lee said: “We asked him to change to a car instead, but he wanted to save money.”

Madam Chai said her husband had committed himself to the tiring commute for the sake of Katherine, whom he is very close to.

“When she hears the motorcycle approaching the house, she will run to the door to wait for him,” she added.

Mr Lee’s supervisor, manufacturing manager Chia Yeow Long, told TNP that the company’s insurance coverage will cover up to $25,000 of his medical fees.

He added that the company intends to give Mr Lee’s family a lump sum in cash and his colleagues had raised several thousand dollars for him.

He said the management was also discussing how else it could help the family.

Mr Chia said: “He is hardworking and willing to learn. He is still young. What happened is quite unfortunate.”

Madam Chai is worried how the family will cope because her husband is the sole breadwinner.

She said: “Even if he wakes up, someone will still need to look after him, and he will need a long time to recover.

“I don’t know if we can be normal again.”