The flat owner, a 51-year-old technician, told the paper that his 42-year-old wife was doing her laundry with her Samsung washing machine in the kitchen toilet.

She left the washer for less than 10 minutes, but rushed back after she caught a whiff of an unusual smell, only to find the machine engulfed in flames and thick smoke.

She fled the flat with her 16-year-old daughter who was also at home at the time.

No one was injured.

The Singapore Civil Defence Force was alerted to the incident at 11.50am and sent one fire engine, two Red Rhinos, two fire bikes and one support vehicle to the scene.

The blaze was extinguished with a compressed air foam backpack.

According to Shin Min, the family bought the appliance four years ago for about $400. The exact washer model is not known.

All that was left of the machine was charred metal. The toilet walls, ceiling and air-conditioning pipes were also burnt.

Responding to queries from The Straits Times, Samsung Electronics Singapore said it is working with Shin Min to reach out to the affected user "so that we may look into the matter and provide the necessary support".

"We are unable to comment on this specific incident until we obtain and thoroughly examine the product," the firm said.

"Customer safety remains our highest priority and we want to work with any customer who has experienced an issue with a Samsung product in order to investigate the matter and support them." 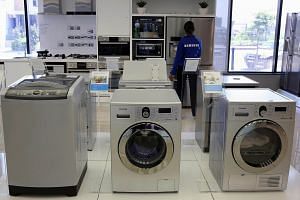 Separately, Samsung Electronics began a recall of about 2.8 million top-load washing machines in the United States last week, following complaints that the top of the machine can unexpectedly detach during use, posing an injury risk from impact.

There have been at least nine reported injuries, including a broken jaw, injured shoulder and fall-related injuries, the US Consumer Product Safety Commission said.

The recall affects 34 models sold between March 2011 and this month.

But Samsung Electronics Singapore assured that the recall does not affect washers in Singapore.

The firm said: "We can confirm that this does not impact top-load washer models sold outside of North America."