Social workers who need a court order to assess the well-being of vulnerable adults despite uncooperative family members have had the process of doing so clarified, with the development of guidelines in the past few months.

Other powers granted by an Act to help vulnerable adults that came into force last month include a protection order to restrain abusers from inflicting further harm, and prohibiting them from entering such an adult's residence.

The Vulnerable Adults Act (VAA), passed in Parliament last May, provides an additional avenue for social workers to turn to when other attempts at engaging the family of the adult - typically an elderly person - have failed.

In response to media queries, the Ministry of Social and Family Development (MSF) said recently that there have not yet been instances where the Act had to be invoked as it was brought into force only on Dec 19.

In the meantime, MSF has worked with medical professionals, social service agencies, the police and the courts to develop standard operation procedures and assessment guides, including a final round of briefings with community agencies in October last year.

MSF officers have also received specialised training on case assessments and interventions, including the protocols that should be adhered to if the VAA powers are invoked, said the ministry. A vulnerable adult is an individual aged 18 or older who, because of a physical or mental infirmity, disability or incapacity, cannot protect himself from harm.

MSF said more than half of the vulnerable adults it has encountered are above 60 years old, with most of them being women. 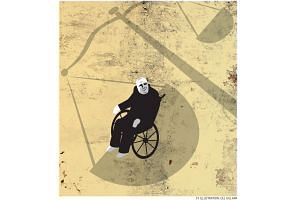 Law to protect vulnerable adults from abuse and neglect passed

There are a range of orders that could be applied for by MSF's adult protection officers or by approved welfare officers, depending on what is needed in each case, and the process is similar to applying for a child protection order, said senior social worker Kristine Lam, manager of Care Corner Project StART, one of Singapore's three family-violence specialist centres.

MSF said most vulnerable-adult cases are managed by such community agencies or MSF's social service offices, which provide support such as financial assistance and counselling.

"Such help is aimed at stabilising the family environment and restoring the relations between the vulnerable adult and caregiver," it added.

Ms Long Chey May, who is a master medical social worker at the hospital, said the vulnerable adults who show up at the emergency department or specialist outpatient clinics usually present themselves with physical signs and symptoms such as poor hygiene and unkempt appearance which "warrant attention and assessment".

If family and community intervention efforts are ineffective, MSF can step in and apply for court orders under the VAA if the vulnerable adult has experienced, is experiencing, or is at risk of experiencing abuse, neglect and self-neglect, and if such orders are necessary for his protection and safety, said MSF.

Certain orders under the VAA could be applied for by approved welfare officers, including from community agencies, or by a vulnerable adult's appointed deputy to the family court.

These orders include prohibiting a person from communicating with or visiting a vulnerable adult, and granting the vulnerable adult the right of exclusive occupation of specific premises.

Other orders, such as a placement order to relocate the vulnerable adult to a temporary shelter, must be applied for by MSF's adult protection officers. These powers were not available before the VAA was passed.

A family court judge can call for family members to make representations to allow the judge to decide whether a court order should be given. These decisions can be appealed.

In many of these cases, it is the caregivers, including family members, that are the perpetrators, said MSF.

Ms Cherylene Aw, centre director of Trans Safe Centre, said the number of cases seen at the Adult Protective Service is "certainly the tip of the iceberg".

About 15 per cent of those helped by the centre in Bedok - which provides help to victims of abuse, people who abuse their families, and affected family members - are vulnerable adults.

On how the VAA is beneficial, Ms Lam cited a recent case of an elderly woman who is suspected to have been mistreated by her daughter. It took her team three weeks to gain entry to assess the mother as the daughter did not allow them to visit the elderly woman at first. With the VAA, they could intervene earlier in such instances.

Ms Aw said that for the majority of the cases Trans Safe Centre handles, there is no need to invoke the Act. "However, for cases in which we are really stuck - for example, the family cannot be engaged - the Act provides an additional avenue for us to take action," she said.

This is especially for cases where the family member using violence - usually a son or daughter - also has vulnerabilities such as chronic mental illness, intellectual disability and financial hardship, she added, emphasising that each vulnerable adult's needs and challenges are different.

MSF said that, as far as possible, it will try to place vulnerable adults with other family members who can take care of them, and avoid placing them in care institutions.

Added Ms Aw: "It's a delicate balancing act, to take into account the vulnerable adult's right to self-determination and dignity while looking out for his best interest.

"Even if their mental capacity has been lost, their past wishes, values and feelings should be considered."