Individuals can soon join the National Environment Agency (NEA) as community volunteers to nudge litterbugs to pick up their rubbish, and spot those who smoke, spit or urinate where they are not allowed.

These volunteers and auxiliary police officers will be given enforcement powers, such as issuing warnings and summonses.

Previously, only those from relevant non-governmental organisations could join the volunteer scheme. Volunteers could also only ask for the particulars of uncooperative offenders, to hand over to NEA officers for further investigation.

In addition, NEA officers have been given more powers to photograph or take a video of any violation of environmental laws. 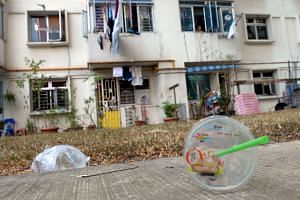 These steps, in the NEA (Miscellaneous Amendments) Bill passed yesterday, come as the number of littering fines hit a six-year high of over 26,000 last year.

Since the community volunteer programme began in 2013, about 340 volunteers have engaged 2,500 litterbugs. And keeping Singapore clean requires everyone to play an active role, Environment and Water Resources Minister Masagos Zulkifli told the House.

"This Bill will allow passionate individuals to take greater community ownership of our environment and better complement NEA's enforcement efforts."

This Bill will allow passionate individuals to take greater community ownership of our environment and better complement NEA's enforcement efforts.

But three Workers' Party MPs spoke up against the Bill, saying the extension of enforcement powers to volunteers could be abused. One called for the Bill to be referred to a Select Committee.

Non-Constituency MP Daniel Goh feared the expanded powers would lead to a toxic environment of neighbours policing each other, while Mr Pritam Singh (Aljunied GRC) took issue with giving the NEA chief executive the ability to grant these powers.

Mr Masagos said the main role of community volunteers is to educate offenders, and that most offenders are cooperative. To prevent abuse, NEA officers will train and supervise volunteers and make sure that reports are made properly and forms filled up correctly.

"At the end of the day, these powers are there for them to be able to use, but not for them to abuse," he said. "It is not about giving them a badge and the powers to do whatever they want."

Some MPs were also concerned about how volunteers are picked.

All volunteers would be interviewed to assess their maturity and interest in environmental activities, he added. They must also be Singaporeans or permanent residents who are at least 18 years old.

Responding to Ms Lee's question about how to ensure that volunteers feel appreciated, Mr Masagos said the ministry would make an effort to recognise them in the media and other outlets.

Several of the six MPs who spoke talked about the need for a mindset change, where people avoid littering not due to the fear of fines but because it is morally wrong.

To that end, Ms Lee and Mr Gan said the Education Ministry's move to introduce daily cleaning by students in schools by end-2016 would go a long way in fostering new social norms.

Mr Louis Ng (Nee Soon GRC) said anti-littering campaigns could be more creative and targeted at hot spots, instead of the usual nationwide ones which "the public might be immune to".

In the interim, Mr Gan suggested that offenders carrying out corrective work orders do so at the place where the offence took place, as well as where they live. They should not be allowed to wear any accessories that cover their face, so that the fear of embarrassment can act as a deterrent, he added.

The Bill was passed without amendment, but all nine WP MPs voted against it.

A version of this article appeared in the print edition of The Straits Times on March 02, 2016, with the headline 'Volunteers to get powers to enforce littering rules'. Subscribe
Topics:
More
Whatsapp Linkedin FB Messenger Telegram Reddit WeChat Pinterest Print Purchase Article Copy permalink