Countering the spread of online falsehoods

New laws are necessary for the authorities to act swiftly against the spread of online falsehoods, but such legislation needs to be crafted carefully to target only those who knowingly and intentionally spread them, said a parliamentary Select Committee studying ways to deal with fake news.

It also spelt out other vital features for these proposed laws.

They need to respect personal and private communications and avoid harming public interest, and they cannot be too broad, as they must take into account that "falsehoods can appear in a broad spectrum of circumstances, from deliberately fabricated content to satire and parodies".

The laws should be able to stop an online falsehood from going viral, and do so in a matter of hours.

In addition, the person making such decisions should be effective and credible, and the safeguards adequate to ensure due process and the proper exercise of power.

These moves will assure people of the integrity of the decision-making process, said the Select Committee on Deliberate Online Falsehoods.

It also suggested that the new laws include powers to take down and block access to online fake news and require corrections and notifications to be tagged to it. There must also be judicial oversight where appropriate.

The committee also urged the Government to identify extra measures, including legislation, that may be needed to safeguard election integrity, citing that Russia-based purveyors of disinformation were found to have meddled in the 2016 US presidential election. 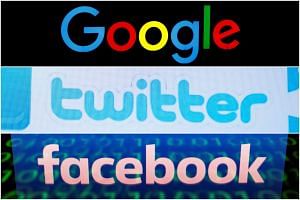 Tech giants may be compelled by law to act

Call to set up fact-checking coalition

Response from public institutions must be prompt

National framework to equip public with skills to discern truth

Another recommendation is for the Government to implement monitoring and early-warning mechanisms that can help determine when and how to intervene to stop the spread of an online falsehood.

The committee also called on the Government to consider what powers it would need to set up a "de-monetisation regime" that will cut off digital advertising revenue to those who start and spread online falsehoods and require them to repay the ill-gotten gains.

"This should cover the 'hired guns' who are paid by others to create and spread online falsehoods," said the committee.

It is an innovative proposal, said professor of media and communication Lim Sun Sun of the Singapore University of Technology and Design. "While demonetisation has been undertaken by private entities, I don't think it has been required by legislation in other countries," she added.

She believed that such a law could work with the cooperation of platform providers.

"If, for example, a YouTube vlogger profits from advertisements hosted on his channel, and his videos contain content that is deliberately calculated to mislead to attract more views, the amount of commercial gain he derives can be quantified and YouTube, as the content host, could then withhold payment to him," she added.

The committee also said criminal sanctions should be imposed on fake news perpetrators, albeit only in justifiable circumstances.

For example, there should be the requisite degree of criminal culpability - intent or knowledge - in line with established criminal justice principles.

It added: "There should be a threshold of serious harm such as election interference, public disorder and the erosion of trust in public institutions."

Prof Cherian George, who gave evidence to the committee and is now a visiting scholar at the University of Pennsylvania in the United States, noted the report recommends a holistic approach that is not over-reliant on hard law.

"It is especially noteworthy that the committee acknowledges that the right to free speech serves the same democratic ideals as discouraging disinformation," he said, adding that the people and MPs should "scrutinise any resulting Bill because the Government tends to write over-broad laws that can be easily abused to stifle criticism".