SINGAPORE - A year-end trip to Hokkaido during the school holidays had been on the cards for Ms Sharon Soh and her family.

Until the product marketing manager saw the devastation wrought on Nepal by April 25’s earthquake. That was when she thought it would be more meaningful for the family to spend their vacation volunteering there.

The earthquake was the worst to hit the mountainous country in more than 80 years, killing about 9,000 people and destroying 598,000 homes.

With the biting Nepalese winter arriving now, many whose homes are unsafe after the earthquake need emergency shelters.

“I felt for Nepal as I was just here on holiday last year,” said Ms Soh, 44. “The people really touched us, so I decided to come back to help with my son.”

It was also a chance for her and her only son, 13-year-old Gerald Tan, to bond, she added. Her husband did not join them as he had to go on an overseas work trip. She forked out about $3,200 - including air tickets - for the trip.

They travelled with 17 other volunteers last month, under YMCA of Singapore’s Rebuilding Communities Programme. The programme is supported by the National Youth Council’s Youth Expedition Project (YEP), which encourages volunteerism among youths and young adults.

The volunteers spent a week in the town of Bhakunde Besi in the Kavrepalanchok district – a two-hour drive from Kathmandu.

Their job was to build 30 shelters together with local volunteers.

Bhakunde Besi was picked because it had been ignored by the main relief and rebuilding efforts, said Mr Wilson Shrestha, director of Living Hope Nepal, a Christian non-governmental organisation based in Nepal and YMCA of Singapore’s partner in the project.

“People were more concerned about places closer to the earthquake’s epicentre, where houses were totally destroyed,” said the 31-year-old. “But if you look at houses in Bhakunde Besi, they are also affected. They might look okay on the outside, but they are not safe to live in at all as there are cracks.”

YMCA of Singapore linked up with Living Hope Nepal through a Singapore connection.

Ms Caroline Wong, Mr Shrestha’s wife, is Singaporean. The couple met when Ms Wong went to Nepal in 2010 for a mission trip. They married two years later. Ms Wong, 36, works as a teacher in Nepal, but also helps Mr Shrestha at Living Hope Nepal, which was founded by his father Surya Lal Shrestha, 72.

The shelters which the sets of volunteer groups put up can last up to three years. They are made up of steel bars and zinc sheets. Each set costs US$200 (S$285) and takes about 30 minutes to build. With an area of 12 sq m, each can comfortably fit in at least 10 people. 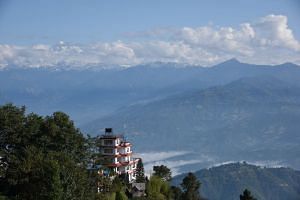 As Nepal rebuilds after earthquake, beauty of its land and people shine through

One volunteer, 32-year-old safety manager Xavier Wong, said the biggest challenge was working with metal. “The zinc sheets’ edges were sharp, and it was not easy to clip two pieces together as we also had limited tools,” he said. “But once you have mastered the technique, it’s quite easy.”

Student Bikash Khatrichhetri, an 18-year-old Nepalese, was among the eight local volunteers. He grew up in Bhakunde Besi.

“When I was 12, I was sent to an orphanage here because my mother could not afford to support my sister and me. My father left us,” he said. “The orphanage put me through school. I was helped, so now I want to help people in the village too.”

This was the first time YMCA of Singapore sent a team to Nepal. But there are already plans to return, said assistant general manager for programmes Andrew Leo, 45.
“Most of us know of the devastation that was caused by the earthquake and how much the Nepalese have suffered as a result of that,” said Mr Leo. “We will certainly like to come back and bring more volunteers to do bigger projects. We’re already talking about rebuilding schools in the village.”

As for Ms Soh and her family, this year’s family holiday will be to Bandung, Indonesia, in December instead of Hokkaido. Not that Gerald, a student in Pei Hwa Secondary School, minded.

“After seeing pictures of how bad it is in Nepal after the earthquake, I wanted to help out,” he said. "We can always go to Hokkaido another time.”