SINGAPORE - Mr Lester Cher, 33, was driving along the Bukit Timah Expressway to pick up his wife when he noticed a burning smell and white smoke being emitted from an air-conditioner vent.

The father of two pulled his BMW X1 over to the side on the afternoon of March 6, inspected the vehicle and realised that the fuse box was burning. Within 10 minutes, the car was ruined.

Mr Cher, who bought the second-hand vehicle last August, said: "It was traumatising to see how the car got engulfed in an inferno in a matter of minutes... Nothing was left."

Thankfully, no one was hurt in the incident.

The good news is that the number of vehicle fires in Singapore has been falling.

The SCDF said the number this year has also dropped, with 24 vehicles catching fire in the first two months, compared with the same period last year (43) and in 2019 (38).

The SCDF noted that most of these incidents happened while the vehicles were moving on the road and were usually due to causes such as overheating and electrical faults within the engine compartment.

It has been working with the Land Transport Authority (LTA) over the years so that the latter can take preventive steps, such as issuing advisories to motor dealers on the types of vehicle modifications to be cautious of.

Motor dealers said most vehicle fires are caused by modifications to stereo, camera or navigation systems, for example.

While the parts themselves are not hazardous, they sometimes involve bad wiring.

And contrary to popular belief, vehicle fires have little to do with the weather.

Mr Raymond Tang, managing director of Yong Lee Seng Motor, said: "We almost never do modifications. Sometimes, we take them out when such cars are sent to the shop. But sometimes, even we don't know if it's safe."

The Automobile Association of Singapore said modifications can also lead to leakage in the vehicle fuel system, although regular wear and tear can also cause flammable fluids to leak.

Sometimes, it can be due to defects in the cars, which are recalled once such problems are identified, with each agent following up individually with its clients.

There are simple steps drivers can follow to reduce the risk of fires.

Mr Tan, whose company tows four to five burnt cars every year, said: "A glaring tell-tale sign of some leakage is when there are oil droplets on the ground when you park your car.

"It is a good practice to always check your car before you drive for the day. Walk one round, check your tyres and see if there is any fluid leakage on the ground."

Rental company Fresh Cars said "if you notice various lights starting to dim, a low-voltage warning, battery issues or fuses that keep blowing out, get your electrical systems checked".

"A simple issue like a nicked electrical wire or a loose wire connection can cause a spark and start a fire," it added.

Drivers are advised to equip their vehicles with a fire extinguisher. 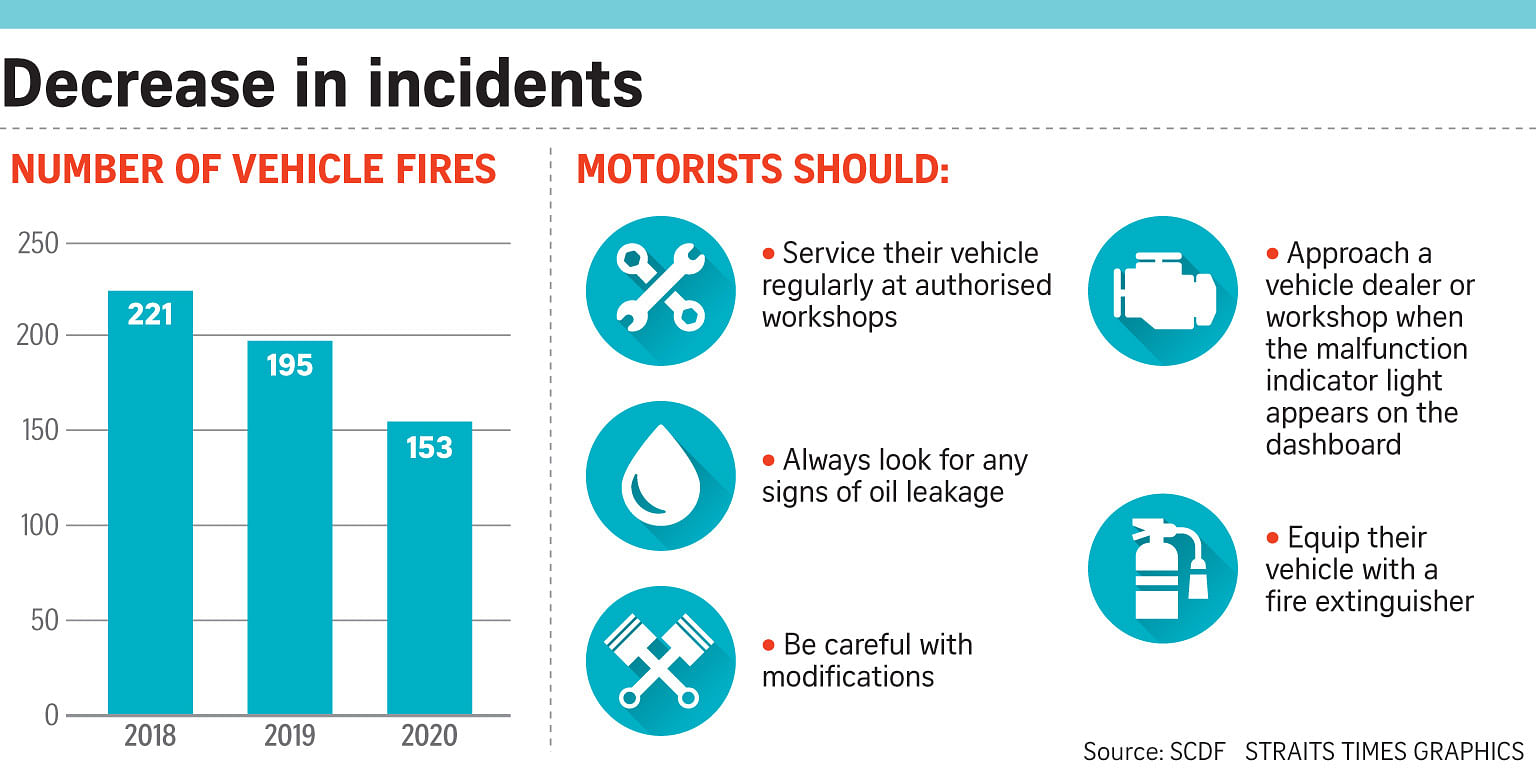 The SCDF said if a vehicle were to emit smoke, drivers should pull over to the side, turn off the engine and evacuate everyone from the vehicle. They should extinguish the flames with their fire extinguisher and call the SCDF if more help is needed.

Most comprehensive car insurance plans cover damage caused by vehicle fires, although coverage may be excluded if the incident is caused by illegal activities, or if the customer did not comply with the manufacturer's recall or service bulletin.

An Aviva spokesman said: "While vehicle fires are thankfully rare, they can, and do, happen, and it is important drivers are not left out of pocket in such unfortunate circumstances."