These challenges, which include inequality, an ageing population, climate change and geopolitical tensions, have often caused strife and divisions in other countries, he said.

Mr Heng, who is also Finance Minister, said this in a speech at an awards ceremony for Berita Harian's Anugerah Jauhari 2019, or Achiever of the Year, which celebrates outstanding Malay/Muslim individuals in various fields.

There are no easy solutions to those challenges, and that is why the community's three Cs - the values of character, competence and citizenry - are so important, said Mr Heng.

Both Prime Minister Lee Hsien Loong at the National Day Rally in August, and Minister-in-charge of Muslim Affairs Masagos Zulkifli during a Hari Raya event in June, had spoken about how these values underpin the Malay/Muslim community's success, he noted.

"We must never allow these differences to unravel our hard-earned social compact in Singapore," he told more than 300 people at the event at One Farrer Hotel.

"Even as our society grows more diverse, we have to enlarge the common space, and rally our people to make common cause for our future," he said, pointing to the 4G political leadership's Singapore Together movement, which emphasises partnership between the Government and people.

Mr Heng presented the Berita Harian Achiever of the Year award to Imam Syed Hassan Mohamed Al-Attas, the head of Ba'alwie Mosque in Lewis Road, in recognition of his contributions to interfaith work.

Habib Hassan dedicated the award to religious and non-religious leaders who believe religion is a way to "unite the hearts of humanity".

"While the award recognises the contributions of individuals, it also represents the efforts and deeds around those individuals, the unseen hands." 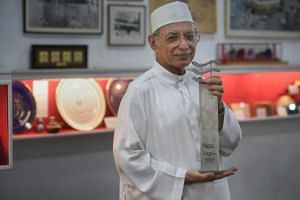 President Halimah Yacob and master potter Iskandar Jalil are among past recipients of the award, now in its 21st year.

The Malay-language newspaper also has a similar award for those aged 30 and under, this year won by Mr Muhammad Dhafer Muhammad Faishal, who received the President's Scholarship in August.

The 19-year-old could not attend the ceremony but thanked his family and all who had supported him in a recorded video message from Stanford University, where he is studying liberal arts.

"I learnt from my father that even though the work is tough, it's really about the purpose you're going in with and the kind of impact you have on people."

Berita Harian editor Saat Abdul Rahman reaffirmed the newspaper's commitment to building a Malay community of success, even as it diversifies its platforms.

"A Malay community, to us, is not a destination but a journey. And we call upon the entire community to come together, share ideas and be a part of this meaningful journey together," he said.