SINGAPORE - A male driver who was questioned in connection with one of the two “kidnap scares” involving international students had no ill-intent, the police have determined.

The Straits Times understands that this driver claimed he had offered a lift to a female student as it was raining then.

Two international schools in the Dover area have alerted parents about two alleged attempts to entice their students into vans this month. The police confirmed to ST on Wednesday (Jan 17) that two reports have been lodged about the cases and the driver involved in one of them has been identified.

A police spokesman said, however, that the investigating officers have determined that the male driver had no ill intent. Police had updated the parent of the child involved in the incident on the findings, the spokesman said.

But investigations in the more recent incident involving “a female driver” were still ongoing.

Police said such reports are treated seriously but advised the public not to speculate before the investigations are completed.

The first case, on Jan 11, involved a United World College (UWC) South-east Asia Dover campus middle-school student (age 11 to 14), who was waiting for the bus in Dover Road. 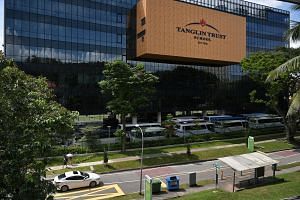 In a letter seen by The Straits Times that was issued to parents by the school, UWC said that the girl was approached by a man driving a van who asked the student to get into the vehicle.

“The student took exactly the right action: She did not respond, walked away in the opposite direction of the van, and informed a known adult,” said the letter. She and her parents filed a police report that night.

The second incident involved a female student from Tanglin Trust School. She was walking to school on Tuesday at 12.30pm from one-north MRT station when she was approached by two people in a white van - said to be driven by a woman - who asked her to get in.

A school spokesman told The Straits Times that the girl ignored them and continued to walk to school. The two occupants of the van then got out of their vehicle and continued to try to persuade her to get in, but she moved away quickly and arrived at school safely.

The student reported the incident to school officials who informed her parents. The school later filed a police report, including a request for greater police presence in the vicinity. Tanglin Trust School is located about 2.5km away from UWC.

Both schools have sent letters to parents about the incidents, while the children have been briefed on appropriate measures to keep themselves safe.

For example, Tanglin Trust School advised parents that "students should not walk alone in the vicinity of the school but walk with friends".

A UWC spokesman said the school also informed schools in the area and other international schools.

One international school, Dulwich College, has alerted parents about the two incidents.

In a letter sent on Wednesday, the school added: “We are indeed blessed to live in a country which is regarded as one of the safest in the world. However, low crime does not mean no crime and we urge you and your children to be vigilant, now and always.”

Fairfield Methodist Primary school, which is also in Dover Road, had also sent out a letter to parents asking them to be vigilant.

The Ministry of Education said it has measures in place to safeguard the security of students and staff in its schools.

It said schools ensure safety by controlling access and through safety protocols and procedures, together with closed-circuit television surveillance systems, gate barriers and security officers.

MOE also said: "Through the school curriculum... students also learn how to keep themselves safe by being aware of their surroundings, avoiding potentially dangerous situations and how to ask for help from trusted adults."

Mrs Jasmine Gan, a 31-year-old housewife whose child goes to Tanglin Trust School, said she was shocked to learn about the incident involving a student from the school, as she had “always thought Singapore was very safe”.

Told about the UWC incident, the Malaysian said she would be more vigilant. She picks her four-year-old son up from the school daily.

“If I had a teenage girl, I would probably be more worried,” she said, noting the similarities between the two cases.

“The school told us to always walk around in groups, and avoid wearing headphones so we can always hear what’s going on around us,” he said.

Another Year 12 student, a 16-year-old who only wanted to be known as K.W., said that aside from telling students to be careful and not to walk alone, the school also "told us not to be overly worried about it, and stay calm".

A nine-year-old student from the school, A. Chong, described the situation as “frustrating rather than scary”.

“I wish I could go home in peace rather than worrying about it," he said. The school and his parents both advised him to “avoid talking to strangers”.

A 30-year-old housewife, who only wanted to be called Ms Mao Mao and was picking up her nine-year-old daughter from Tanglin Trust School, said she was "really scared" when she first heard about the incident. "I never expected something like this to happen in Singapore,” she said.

Madam Wang Shufen, 70, picks her seven-year-old grandson up from UWC every afternoon. She said the alleged kidnapping attempts worried her.

"This happens a lot in China and other countries, but I think Singapore is safer," the Chinese national said in Mandarin. "But this incident is a good reminder to be vigilant."

She added that she tells her grandson not to go off with a stranger, even if he claims he was sent by family members.

Nanny Nonietta Serna, 52, who usually picks up her employer's child after her activities at UWC, said her employer told her to remind the Grade 1 child to be wary of strangers and not to wander off.

High-school students from UWC said the school informed them briefly of the incident during an assembly on Monday and told them to walk away and inform an adult if a stranger approaches them.

A 15-year-old UWC student, who wanted to be known only as H.D, said the school has always taught its students what to do when approached by strangers like in the recent cases. "We know enough not to get into a stranger's vehicle. It's common sense," she said.