SINGAPORE - The portable USB fans given to journalists during the Trump-Kim summit have no storage or processing capabilities, the Ministry of Communications and Information (MCI) said on Wednesday (June 13).

Recent media reports, including by the BBC, said that the USB devices could pose a cyber-security risk, as they can carry malware.

The fans were distributed in goodie bags to more than 2,500 local and foreign journalists who were in Singapore to cover the historic summit between US President Donald Trump and North Korean leader Kim Jong Un on Tuesday.

Items in the goodie bags, which included notebooks, tourist guides and bottled water from various partners, were put together by MCI.

In response to queries from The Straits Times, an MCI spokesman said that the fans are "simple devices with no storage or processing capabilities".

The media kit at the central media center for the #TrumpKimSummit is full of good stuff. Free newspapers, local food guides, etc. But this fan is the best (IT'S SO HOT HERE): pic.twitter.com/pZoFiUvaSx

Media goody bag: Mini USB fan, hand-held fan with #TrumpKim on either side to blow around all the hot air.... and a fun guide to Sentosa. NB: that's not the delegations playing beach volleyball. pic.twitter.com/fbdKVzr0Cn

The spokesman also added that the fans, which were distributed by Sentosa Development Corporation (SDC), were part of SDC's ready stock of collaterals originally meant for Sentosa Islander members.

Sentosa Islander is a membership programme for individuals and families visiting the tourist island. 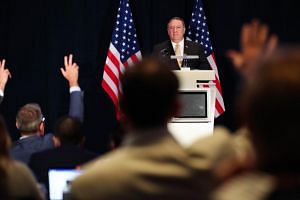 "SDC had assessed USB fans to be a handy and thoughtful gift for the media working in Singapore's tropical climate," the spokesman for MCI added.

Since Sunday, when the International Media Centre for the summit opened at the F1 Pit Building, several journalists have tweeted about the USB fan.

In its report on Tuesday, the BBC quoted a cyber-security expert as saying that plugging in a USB stick has been a "classic way of circumventing security measures to get your software on their machine".

Professor Alan Woodward from Surrey University told the BBC: "There's an adage in cyber security: If you give someone physical access to your computer, it's no longer your computer. Use an unknown USB stick and you are doing just that."