SINGAPORE - The United States will deploy two littoral combat ships to Singapore later this year, a top US military commander said on Thursday (March 7), citing the move as a positive sign of its commitment to the region amid increasing Chinese military activity in the South China Sea.

The commander of the US Indo-Pacific Command, Admiral Philip Davidson, said that the US has maintained the majority of its naval, land and sea forces in the Indo-Pacific.

"You're not going to see those reduced by any sense of the word," said Adm Davidson, who was speaking to reporters at the US Ambassador's residence. He was on his third visit to Singapore since assuming command in May last year.

The US Indo-Pacific Command has about 380,000 civilian and military personnel assigned to its area of responsibility, which stretches from the waters off the west coast of the US to the western border of India, and from Antarctica to the North Pole - about half the earth's surface.

It was renamed from the US Pacific Command last year, in a move signalling the growing importance of India to the Pentagon, reports said.

The deployment of the US littoral combat ships, which can be used for regional patrols, is behind schedule.

Three such warships have been deployed to Singapore since 2013.

The last one, USS Coronado, left Singapore in November 2017 after completing a 14-month tour of duty. 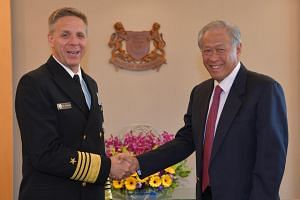 Adm Davidson said on Thursday that talks to renew the agreement that grants the US access to military facilities in Singapore were ongoing.

Senior Minister of State for Foreign Affairs Maliki Osman said last Friday during the debate on his ministry's budget that both sides were working towards renewing the 1990 agreement by 2020.

The Logistics Group Western Pacific based in Sembawang provides logistics and maintenance support to US ships in the western Pacific and Indian Oceans.

On Chinese activity in the South China Sea, Adm Davidson said the US has observed an increase in their naval activities, ships and submarines in the past year.

"I think it's a hazard to the trade flows, the commercial activity, the financial information that flow from the cables under the South China Sea, writ large," he said.

He said that the Information Fusion Centre and the Changi Regional Humanitarian Assistance and Disaster Relief Coordination Centre located at the RSS Singapura-Changi Naval Base are how information could be shared across different countries.

Adm Davidson said the idea of a free and open Indo-Pacific region - the topic of a lecture he delivered here on Thursday - was not meant to exclude any countries. The lecture was organised by the International Institute for Strategic Studies.

"We welcome China in the idea of a free and open Indo-Pacific, and (we're) absolutely focused on the idea of Asean unity as the stability that this region needs. We're not seeking to drive divergences within Asean and make them choose between us and China," he said.

He added that Singapore remained an important partner.

"Singapore puts the dash in that Indo-Pacific Command, that really makes our Indian Ocean operations... viable, as a logistics support and sustainability node."