SINGAPORE - The United States has said that the region is increasingly confronted by a more confident and assertive China that is willing to accept friction in the pursuit of a more expansive set of political, economic and security interests.

In a report on its Indo-Pacific Strategy released on Saturday (June 1), the US Defence Department said China, as it continues its economic and military ascendance, "seeks Indo-Pacific regional hegemony in the near-term and ultimately global preeminence in the long-term".

The report called China a "revisionist power" that under the leadership of the Chinese Communist Party undermines the international system from within by exploiting its benefits while eroding the values and principles of the rules-based order.

It also characterised Russia as a "revitalised malign actor" that uses economic, diplomatic, and military means to achieve influence in the Indo-Pacific region and North Korea as a "rogue state" that will continue to be a security challenge for the US and its allies, partners and competitors until "final, fully verifiable denuclearisation" is achieved.

In response to these challenges, the US wants to build a network of trilateral partnerships and will continue to support multilateral institutions like Asean as part of its strategy to achieve the vision of a free and open Indo-Pacific, the report said.

It will also encourage intra-Asian security relationships, such as through new defence agreements and enhanced exercises, as it believes that greater burden-sharing will strengthen the ability to deter conflict and increase the flexibility to respond to challenges.

"As we weave together these partnerships with purpose, a networked security architecture - with its shared values, habits of cooperation, and compatible and complementary capabilities - will form a strong, free and open fabric that knits the region together, preserving sovereignty and regional peace and stability for years to come," it said. 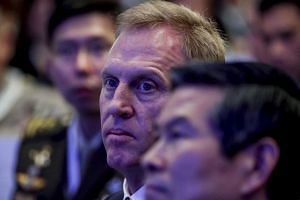 In tandem with the report, Acting US Defence Secretary Patrick Shanahan delivered a speech at the Shangri-La Dialogue on Saturday that mapped out the key aspects of the Indo-Pacific Strategy.

He pointed out that the Indo-Pacific was the US' "priority theatre", asserting that the US has a "natural presence" in the region as a Pacific nation.

The Indo-Pacific as defined by the US stretches from the west coast of continental US to India and straddles two oceans, the Pacific and Indian oceans.

As part of efforts to promote a networked region, the report said that Pentagon was "strongly emphasising trilateral mechanisms" to bring together like-minded allies and partners, such as the South Korea-Japan-US partnership, or between US, Japan and India.

Citing the Asean-US Maritime Exercise as an example of multilateral engagement, it said that the exercise will take place in September in Bangkok and in international waters in South-east Asia.

China has been wary of the Indo-Pacific Strategy concept that was first articulated by President Donald Trump in November 2017 in Da Nang, Vietnam, and officially elaborated upon by the State Department in April last year.

At last year's Shangri-La Dialogue, then Defence Secretary Jim Mattis spoke about the security aspect of the strategy in his speech.

While the full name of the concept is the "Free and Open Indo-Pacific Strategy", to the Chinese, it is anything but "free and open". Chinese scholars have said it is meant to constrain China's rise.

In an article late last year, Fudan University Professor Zhao Huasheng said it was explicable that China treats the concept with a "certain coldness and suspicion" given that it is "unfriendly" towards the Asian power.

"Under the conditions that the Indo-Pacific Strategy is unfriendly to China, there is not much room for China to coordinate with the US in this plan," he wrote.

"That kind of redefinition of China is really very misleading and very risky. It will keep China cornered and (constrict) the space in which both players can constructively handle their disagreements," he warned.