SINGAPORE • At this "bar" in Singapore, there is neither loud music nor any alcohol. Instead, you sit in silence and are served tea by waiters who have trouble hearing.

Hush Teabar, which was set up in 2014, aims to create a space for busy urbanites to slow down and enjoy moments of silence, while creating jobs for deaf people.

It was started by Ms Anthea Ong, 47, who was a managing director of a consulting group. She left the corporate job in 2013.

The tea bar does not have a permanent space, but instead travels and brings the experience to corporate offices.

Ms Ong says: "Silence allows you to remember who you are and connect with yourself. But we don't practise it enough." 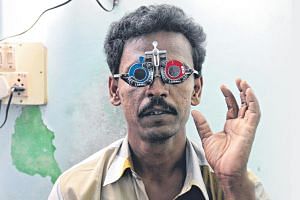 To date, the tea bar has served about 1,000 people and is profitable. She has a team of about 25 deaf employees who work with her on a project basis. "They are called TeaRistas," Ms Ong says.

A participant pays about S$40 a session, which is split into four sections and lasts 30 to 45 minutes.

The first section explains the tea bar's mission to the participants.

Next, participants choose a blend of tea that they feel best represents their current or desired state of mind, from 12 tea blends made of flowers, herbs and fruit.

TeaRistas will perform tea rituals using sign language, gestures or flash cards. Participants will then be served tea and they will do the tea rituals on their own.

After this, participants reflect and express their thoughts through what Ms Ong calls TeaArt. This is similar to finger painting but participants draw using tea. The session ends with participants sharing their experiences.

While the tea bar creates a space for reflection, Ms Ong says it was also designed with deaf people in mind. "I have a lot of admiration for the deaf. It provides something that is dignified for them," she says.

Mr Rahmat Hamka Osman is one of the TeaRistas. The 24-year- old, who lost his hearing when he was five, holds several jobs at a time, such as as a part-time chef or retail adviser. He says: "This is one special job, and I am proud to be in it. I like how it is quiet, but loud in its ambition."

Ms Ong says: "Hush helps to bridge this gap and gets us to step into their world. By creating a calmer and kinder world, I hope society becomes more inclusive."

A version of this article appeared in the print edition of The Straits Times on June 25, 2016, with the headline 'Urbanites sit to savour silence at this bar'. Subscribe
Topics:
More
Whatsapp Linkedin FB Messenger Telegram Reddit WeChat Pinterest Print Purchase Article Copy permalink