When he attended agricultural school in Britain in 2011, Mr Bjorn Low and his classmates were asked to slaughter 200 turkeys for the Christmas season.

His teacher later asked: "Did you feel anything?" It was then that Mr Low realised he had pushed emotions aside and focused just on getting the job done.

"It is like today's agricultural system where everything is so mechanised and we have lost touch with our feelings and lost touch with the earth and soil in a bid to mass produce food for society," said Mr Low, 38, who was formerly working in advertising in Britain.

He came back to Singapore in 2012 to start an urban farming social enterprise, with a business partner who has since left.

From $10,000 in initial capital, the social enterprise now known as Edible Garden City looks to hit $1.5 million in revenue this year.

In a country where 90 per cent of its food is imported and only 1 per cent of the land is cultivated, the enterprise has helped to design and build 180 commercial and residential food gardens. It also supplies herbs, microgreens and edible flowers to 60 restaurants. 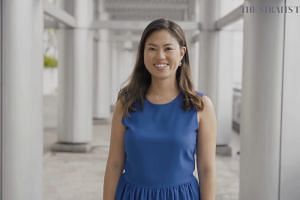 Elizabeth Tan: Sights set on eye care for the needy in Himalayas

Kenneth and Adeline Thong: They share their home with young people in need

"I am grateful for the big project that Marina Bay Sands gave to us in 2014 when we created a herb garden for their Rise restaurant, as it then gave us the proof-of-concept to work with other hotels and property developers," he said.

It was a pioneer in turning underused rooftop spaces into farming spaces in buildings such as Wheelock Place and Raffles City.

In 2015, it piloted an urban farming model in Queenstown called Citizen Farm that involved the community in farming. Currently, 10 people with autism are hired to work on the farm.

Edible Garden City also secured a grant of $160,000 from DBS Foundation last year and another of $500,000 from Temasek Foundation Ecosperity this year.

Next up, Mr Low hopes to tender for a new urban farm site in Henderson to build an urban farming therapy centre. Closed-loop self-contained farming units or containers will also be launched at Citizen Farm in January next year. The idea is to distribute these to housing areas across the island, so each community can grow its own food sustainably.

Mr Low, a father of two who is inspired by Japanese farmer and philosopher Masanobu Fukuoka, said: "As we nurture life, we are actually nurturing ourselves."