This will make screening more efficient; arriving and departing passengers will also not be allowed to mingle

SINGAPORE - When it opens next year, Changi Airport Terminal 4 will have security measures that are very different from what passengers in Singapore are used to.

Unlike the existing terminals, where passengers are screened at individual gatehold rooms, T4 will have centralised screening. This means the checks will be done at a common point, said Changi Airport Group's vice-president of aviation security Alan Tan.

Currently, passengers have to remain in the gatehold rooms after screening until their flight departs. 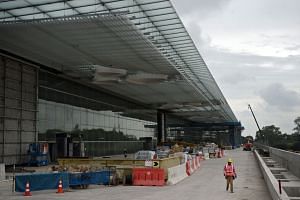 Motorists to get direct link from PIE

At T4, once the security checks are done, passengers will be free to shop and dine in the transit area until it is time for them to board, Mr Tan told The Straits Times.

But arriving and departing passengers will be kept apart from one another, unlike at existing terminals where they can mingle.

Explaining the logic behind this, Mr Tan said: "This is to mitigate any potential risks. For example, we do not want arriving passengers passing items that may be prohibited or dangerous to those who are departing on our flights."

For the same reason, restaurants and shops within the restricted areas will be strictly monitored to ensure dangerous and prohibited items like sharp knives do not end up on planes.

They will also have to ensure proper stocktaking of items, including cutlery, he said. "The key is to ensure a sterile zone so all items and goods will be screened before allowing entry," Mr Tan added.

Industry observers noted that at some other airports that have centralised screening, restaurants have to chain choppers and other big knives to walls for safety.

While there may be some concerns that centralised screening could lead to bottlenecks and long queues, Mr Tan said: "The terminal needs to be properly sized to ensure there are enough security lanes and processes put in place to allow for effective and efficient screening."

For the first time at Changi Airport, for example, facial recognition technology will be used to eliminate the need for manual identity verification by staff.

Said Mr Vinoop Goel, the International Air Transport Association's regional director (airport, passenger, cargo and security): "Having resources in a central location instead of being distributed at multiple points is more efficient... However, extra measures will also be needed to screen all goods coming into the common departure area."

Travellers would have a better experience, too. "With gate screening, you're basically limited to the holding area for 20 minutes or longer, which is probably not as pleasant as being able to shop or eat till your aircraft is almost ready to board," added Mr Goel.

Even with centralised screening, there will be instances where travellers are screened just before boarding, if necessary.

He said: "For example, there may be flights to particular locations where specific screening measures are needed and these can still be done before boarding. There is no compromise on security."