They will help nation build deeper and wider, freeing up more land for people-centric uses

Three-dimensional subterranean maps of Marina Bay, Jurong Innovation District and Punggol Digital District were rolled out at the launch of the Draft Master Plan yesterday at the URA Centre in Maxwell Road.

This marks the first phase of what the authorities hope will eventually be a seamless underground map of the country.

The maps show specific locations of bus and rail networks, carparks, pedestrian links, roads, logistics use and utilities, up to a depth of 8m, 15m and 25m for Jurong, Punggol and Marina Bay respectively.

URA chief planner Hwang Yu-Ning told the media in an earlier briefing on Monday that the underground plans are part of a strategy to create spaces for the future as well as build capacity for growth.

She pointed to Singapore's first 230kV underground substation as an example of optimising land use by saving ground space for higher-value purposes.

Located next to Labrador Park MRT station, the substation will be integrated with a commercial building above, freeing up 3ha of land above ground for development.

There are several underground 66kV substations that are already operating in Singapore.

Architect Jason Pomeroy, who is behind the redesign of the Kallang area in the Master Plan, called it a "huge benefit" to have facilities and infrastructure underground without compromising the usability of space on the ground. However, he added that one also has to be conscious of the cost of digging as well.

The maps are also meant to help facilitate planning so that subterranean space can be used efficiently and effectively by building owners and developers.

National Development Minister Lawrence Wong said in a speech at the launch yesterday that the underground plans "will help coordinate planning of infrastructure, storage and utilities".

Veteran urban planner Steven Choo said that with such plans, developers can be more certain about the development potential of the land.

"They will also be freed from constraints on their land while benefiting from better connectivity and efficiency of district-level services that the plans might offer," said Dr Choo, who is chairman of real estate advisory firm VestAsia Group.

National University of Singapore civil engineering professor Yong Kwet Yew supports the push to go underground and highlighted how other cities, such as Montreal and Helsinki, have successfully created extensive underground networks.

"The best (thing to do) is to actually put all the transport links and facilities underground. Major cities in the world are already doing it.

"I think we should do the same, especially when traffic causes a noisy ambience for surrounding neighbourhoods," he said. 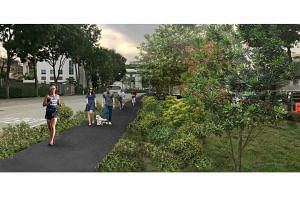 "But I think the impact is generally very minimal," he said. He added that technical constraints can be solved through research.

There are also plans to build deeper. Besides existing caverns such as Jurong Rock Caverns - an underground storage facility for liquid hydrocarbon that goes more than 100m deep - there are ongoing cavern studies by statutory boards JTC and PUB which will help identify potential cavern spaces for industrial, utility and storage use.

Jurong Rock Caverns and an ammunition facility in Mandai have saved Singapore 360ha of land, about the size of Marina Bay.

The Government has said earlier that there is no intention to locate residential homes underground.

Here are some other highlights from the plan, which may be gazetted later this year.

Future residential precincts will be laid out in such a way that there is easy access to a wide range of public spaces and amenities.

Integrated hubs such as Bukit Canberra in Sembawang and Punggol Town Hub will make it easier for residents to shop, dine and engage in family activities under one roof.

The Pasir Panjang Power District, which will be connected to the rest of the Greater Southern Waterfront stretching from Pasir Panjang to Marina East, will become a lifestyle and heritage destination.

Government agencies are exploring strategies to realise this, such as the "adaptive reuse" of the former power station buildings and opening up the grounds for public access.

URA and the Singapore Land Authority will be launching a competition next month for the public to contribute ideas on how the precinct can be transformed.

Work on the area will start after 2030, when the air base is vacated, freeing up 800ha of land.

The site will be transformed into a new town with jobs and amenities.

Some of the preliminary ideas to transform the area include:

•Retaining the area's rich aviation heritage by repurposing the former airport buildings and parts of the runway;

•Creating a network of parks and open spaces with leisure options;