It was the United Nations group's second attempt at pushing through a mediation convention, and just as it looked like there would be a breakthrough, a raging snowstorm forced the closure of the UN headquarters in New York.

The delegates had to frantically scramble for an alternative place to continue their talks, said the group's chairman, Singaporean Natalie Morris-Sharma.

"We had identified the most difficult issues, and that was the week we were going to try and work through them... then, there was the snowstorm," said Mrs Morris-Sharma, recounting the events in February 2017.

The director of the Law Ministry's international legal division led the UN Commission on International Trade Law's Working Group II on Dispute Resolution from 2015 to 2018.

The group's negotiations led to the formation of the UN Convention on International Settlement Agreements Resulting from Mediation, also known as the Singapore Convention on Mediation.

The convention sets out provisions for the enforcement of mediated settlement agreements across different country borders. It opens for signatures today.

Mrs Morris-Sharma, who was elected chairman in 2015, said earlier concerns from the early 2000s initially hindered the sealing of a treaty.

"When I sat in the room in 2015, more than 10 years later, there were a lot of echoes of the concerns raised in the 2000s, that were still being talked about," she said. 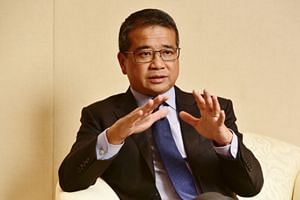 "Almost every session, I think one of the (foreign) delegations would issue a statement expressing reservation," she said.

A key concern was whether the provision of the cross-border enforcement for mediated agreements was better suited in a treaty format, or as model laws that nations could then adopt and adapt for their own country.

The turning point came on the day of the snowstorm, when some 40 delegates from around the world squeezed into a small, stuffy conference room to continue negotiations, she said.

"Once they entered the room, they stayed there until the end; that was the session where we came up with an (important) compromise," said Mrs Morris-Sharma.

The Singapore delegation - led by the Law Ministry's policy advisory director, Ms Sharon Ong - then helped to secure support for the negotiation outcomes by reaching out to delegates who were not present, and ensuring they were on board with the progress.

Ms Ong said the team also sought to alleviate any concerns the delegates might have had.

"Even countries with very strong views on certain issues came around," said Ms Ong, adding that such behind-the-scenes work is an important aspect of treaty-making.

"It's engagement of that sort that would bring people on board. So everybody felt they had a stake in this, and they understood where the group was going," she added.

With more than 30 countries expressing interest in signing the convention, Ms Ong said the results have been "phenomenal and beyond expectations".

Said Mrs Morris-Sharma: "Now, on reflection, we look back and say it was the snowstorm that created this."