With life expectancy here rising steadily at three years per decade since Singapore's independence in 1965, living to 100 years might no longer be a pipe dream down the road. In The Straits Times Roundtable, Healthy For 100, held on Sept 10 at Marina One East Tower, four key stakeholders in the field of ageing got together to discuss pressing issues that Singaporeans will have to tackle as they enter their golden years.

Singapore now has the world's longest-living population, stealing the crown from long-reigning champion Japan. While the coveted spot is testament to the rising standards of living and healthcare here, longevity comes with its own issues, such as the need for more retirement savings, and rising medical costs.

In the Healthy For 100 roundtable discussion presented by Prudential Singapore, The Straits Times tackles the following questions with the help of guest panellists: Should people continue working past retirement age? Will insurance premiums skyrocket as healthcare costs rise? What must be done so that we do not only live long, but live well too?

IS SILVER THE NEW GOLD?

Ageing should be looked on as "silver dividends to be reaped" instead of a "silver tsunami to be feared", noted Senior Minister of State for Health Amy Khor as she opened the discussion, although she agreed that the picture was not all rosy.

"We need to acknowledge that there are challenges to ageing... If not, some people would not have referred to it as a silver tsunami," she said.

On the bright side, older people are a "very precious resource" to be tapped, in employment, volunteering and caregiving, said Associate Professor Lim Wee Shiong, senior geriatric consultant at Tan Tock Seng Hospital.

"In a workforce, we need the vibrance, the energy and the creativity of young people, but having older ones around with experience, perspective and their mentoring is also important," he said.

He cited a US-based literacy programme where volunteers aged 50 and above tutored vulnerable children who were struggling in school. The schools that ran this programme became popular because of its success.

THE DEFINITION OF 'OLD''

The panellists also sought to turn the definition of "old" on its head.

Prof Lim pointed out that until recently, demographic data grouped by age bands would categorise everyone in five-year bands, but those above 65 were lumped into the same band. Now, there is greater segmentation of older people into further sub-groups.

"I think we're increasingly recognising there are many segments: People in their 60s have different needs from people in their 90s," he noted. "Sometimes it's just the simple things like remembering to break down the data and not lump everybody together. That will start to change attitudes."

Ms Rachel Ngo, deputy director of the healthy ageing division at the Health Promotion Board, said what is important is not so much age, but that one should be well enough to "continue to do what you want to do for as long as you can". "It's not just about when you can start drawing down from CPF, or when you can start getting your ez-link card for senior concession," she said.

WORKING INTO THE GOLDEN YEARS

As Singaporeans live longer, many will need to keep working to finance a retirement that could stretch to four decades.

But employment brings other benefits besides income, such as a sense of fulfilment, a boost to self-esteem and the chance to contribute to society, noted Dr Khor.

Prof Lim noted that work helps people to stay meaningfully engaged, which may in turn help to fend off neuro-degenerative diseases common among the elderly, such as dementia. Other ways include volunteering and taking on caregiving roles, he noted.

The Silver Volunteer Fund was launched in 2015 as part of the Government's plans to encourage active ageing. The fund is used to support voluntary welfare organisations that develop programmes providing volunteering opportunities and training to seniors.

Dr Khor said that as of last month, more than 6,900 new senior recruits had benefited from the fund.

Over the years, we have actually provided many programmes in the community to try and get them (older people) to be healthy. But at the end of the day, we have increased subsidies so that if they need to see the doctor, they will not be denied care because they cannot afford to see the doctor. Therefore, please don't think that you cannot afford to fall sick. You can. But we hope that you will not fall sick.

One of the key things that we will need to look into and think about as a society is really about managing transitions. Important transitions include retirement, stepping into the caregiving role, bereavement. This is not something that we often want to think about or do something about. We're often thrust into that role.

BEING AN ATTRACTIVE EMPLOYER

People don't stop being able to do their jobs well just because they hit their 62nd or 65th birthday. So for us, being attractive for people and encouraging people to stay with us makes a lot of sense... It's an obvious thing to do, particularly as the population ages, to make ourselves attractive as an employer to more senior people.

Ageing is inevitable. But how we age in part is by choice. At the end of the day, as governments, as a community, as private entities, we can do as much as possible to create the ecosystem to support ageing in place. But it's down to personal responsibility. And that really comes down to planning early and acting on it.

MS RACHEL NGO, deputy director of the healthy ageing division at the Health Promotion Board.

An older workforce is inevitable, given the country's low total fertility rates. By 2030, one in four people will be 65 and above.

"Allowing older workers who wish to work and are able to do so really does help our employers address some of these manpower challenges," said Dr Khor.

Last year, 43.8 per cent of people here between 65 and 69 were employed, compared with 25.7 per cent in 2007, according to figures from the Ministry of Manpower.

Over 90 per cent of eligible private sector employees who wished to continue working were offered re-employment at age 62, and two-thirds of them were able to continue on their existing contracts, without a specific end date.

In October last year, Prudential Singapore became one of the companies that allow their employees to continue working beyond age 62 with no change to their terms.

The oldest employee at Prudential Singapore is 64.

Prudential Singapore chief executive Wilf Blackburn said the move made commercial sense in an intensely competitive labour market like Singapore. "Because people don't stop being able to do their jobs well just because they hit their 62nd or 65th birthday," he noted. "For me, it's an obvious thing to do, particularly as the population ages, to make ourselves attractive as an employer to more senior people."

Mr Blackburn offered assurances to younger employees who fear they may not move up the ladder if older staff members remain in their positions.

He said many of Prudential's older employees want to keep working but not always at the same level of responsibility.

Some senior Prudential employees have stepped down from their management roles to be part of the team, while others took on alternative roles within the organisation.

Dr Khor agreed that many seniors might prefer to work on a part-time or ad-hoc basis or take on alternative roles as mentor or consultant to junior employees.

With "clever and conscientious" job redesign, Dr Khor said, employers can continue tapping their strengths, while younger employees do not have to worry about their chances of progression.

Mr Blackburn added that a work environment that offers flexibility and no symbols of status will also help senior workers to be comfortable in reduced roles.

"In an environment where nobody has an office and everyone has the same facilities, nobody feels bad if they take on a lower level of responsibility, and I think everyone feels more comfortable in that situation," he noted.

But an optimistic outlook for ageing can be very quickly reversed by poor health, and a study out earlier this year showed that while Singaporeans are living longer, they also spend correspondingly more years in disability and illness. 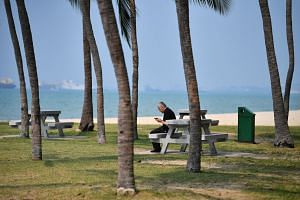 Staying active and healthy in the later years

The average person has a life expectancy of 84.8 years, but despite enjoying the longest healthspan of 74.2 years in the world, he will spend 10.6 years in ill health and grapple with chronic conditions such as diabetes and dementia.

The prevalence rate of chronic conditions such as diabetes for Singaporeans aged 18 to 69 years old increased by 4 per cent between 2010 and 2017, while the rate for hypertension rose 14 per cent.

Figures from the Ministry of Health showed that about two-thirds of Singapore residents between 65 and 74, and 70 per cent of those aged 75 years and above were reported to have at least one known chronic condition - diabetes, high blood pressure or high blood cholesterol - last year.

Prof Lim noted that the healthcare system, while having done a "very good job for the past 30 or 40 years", was designed largely for episodic care, or acute illnesses, in younger people.

With more older patients suffering from multiple interacting diseases, there is a need to review the system so that it adapts to changing needs, he added.

INVESTING IN A HEALTHY LIFESTYLE EARLY

Dr Khor said if chronic conditions were not properly managed, serious conditions will follow that will impact quality of life.

Ms Ngo noted, however, that it is possible to continue to function and be productive at work if chronic conditions are managed well. She urged people to plan to age in good health and act on it as early as possible, adopting habits such as exercise, a good diet and regular check-ups before health problems start surfacing.

The paradox is that people who are well tend to take good health for granted, even though they would "reap the biggest dividends" if they were to invest in a healthier lifestyle, said Prof Lim. "Exercise is king. Nutrition is queen. Together they make a kingdom," he added.

Another crucial factor in physical health is psychological well-being, said Prof Lim, citing a study of nonagenarians which found that psychological factors such as resilience, optimism and neuroticism played a part in determining whether seniors aged well or not.

He added that society needs to look at properly managing major life transitions - such as retirement, stepping into a caregiving role and bereavement - as these events have an impact on mental well-being.