Ai Takagi, the chief editor of socio-political website The Real Singapore (TRS), surrendered herself at the State Courts and began her 10-month jail term yesterday.

The 23-year-old was convicted of sedition last month after she pleaded guilty to publishing seditious articles on the website.

Her sentence was deferred till yesterday. 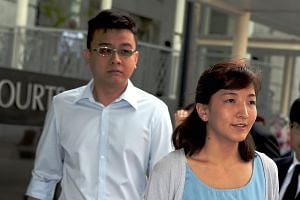 The court had found that the articles published by TRS were intended to "provoke unwarranted hatred against foreigners in Singapore".

Takagi, an Australian of Japanese descent, had told the court she set up TRS in 2012 to let Singaporeans express their views without fear.

But the prosecution said the website was in fact a revenue-generating business.

The court found that Takagi was a "a shrewd businesswoman who was driven by financial gains".

Takagi, who is 12 weeks pregnant, arrived at court yesterday with her husband, Yang Kaiheng, 27.

The case against Yang - who allegedly helped her run the site - is ongoing. He is expected back in court on June 22.