Pearl Bank Apartments, the iconic horse-shoe shaped residential block located in Outram Park, has been turned into a dumping ground for defunct electrical goods, such as refrigerators, and old furniture, such as mattresses and broken wooden cabinets.

Residents had discarded them while they were moving out, following the collective sale of the property to CapitaLand for $728 million in February last year.

It has 288 units, and all residents have to vacate the apartments by April 30.

Meanwhile, items such as clothes, pillows, umbrellas and plastic bags filled with discards can be seen clogging the corridors of the 37-storey building and blocking entryways.

Mr Edward Ong, 57, who was moving out on Tuesday, told The Straits Times: "Most of the junk was left behind by residents, many of whom have been living here for decades.

"Some of my elderly neighbours don't have the ability to carry heavy items to the bins, so they just leave all their unwanted stuff outside the flat."

Mr Ong and his wife, also 57, moved into Pearl Bank in 1980, four years after the building was completed. 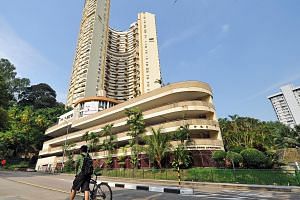 Pearl Bank still special after all these years

He said he had to struggle to get his belongings out of his flat. "I couldn't take three steps without bumping into rubbish. I was trying to carry one of my old chairs to the lift and hit one of the discarded cabinets, which caused the chair leg to break off."

He said he has also hired more workers to remove unwanted items left in the common areas.

When The Straits Times visited the block on Tuesday evening, discarded household items were seen lining several corridors leading to lift landings and blocking the base of a number of stairwells.

Retiree Micheal Wong said he had seen karung guni men pick through the rubbish for usable items, such as clothes and electrical fans.

"I was quite surprised to see even good-quality refrigerators get dumped. One of my neighbours took one of them when he saw no one was coming back for it," said the 65-year-old, who is planning to move out soon with his wife Cara, 64, to stay temporarily with one of their children who lives in River Valley.

A CapitaLand spokesman told The Straits Times the issue is currently being handled by the managing agent.